A few days ago, New York Police Department (NYPD), one of the largest police force in the United States of America.  For they had announced that they are planning to make New York greener,  All by replacing their gasoline motorcycle fleet with the super quiet and energy efficient electric scooters from Vectrix. 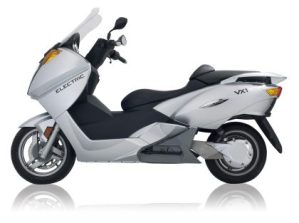 As people start driving electric scooters, they find more and more reasons to like them. Also they are easy to park and get great gas mileage. With gasoline price raising day by day, the popularity of playful, fuel-efficient electric scooters has soared. According to industry experts, last years sales have doubled compared to a year ago. Also and only in 2005 more than 300,000 electric scooters were sold.

So then you can recharge the battery. Electric and motor scooters allow you to save money on gas – even Vespa, the grand dame of scooters, easily sips one gallon of gas during 50 miles of city ride.

In conclusion, some of the NYPD officers are really excited with the electric scooters.  For that’s because they believe that the scooters’ low noise outputs would be a good advantage for them, ” You could easily sneak up on somebody if they don’t expect it. ” said NYPD’s Detective, Derek Siconolfi.