Ron and I both are feeling this amazing moment — and comparing notes.  For we agree it feels unreal that we are actually driving real production plug-in vehicles. Ron feels it’s the most advanced vehicle he’s ever seen. Even without signs on the cars.  That’s because people notice them and are giving us thumbs up on the highways (as happened when there were only a handful of hybrids on the road).  His son was trailed by a highway patrolman who wanted to talk about the car. Andy Frank says it’s “exactly as I had anticipated it would operate. It’s like driving my dream.”

See below for links to media and photos of our celebration.  Also the amazing uptake on our Victory essay.  Finally and some new good news from GM. Enjoy your holidays!

(Shortly after it goes out on email, this posting will also be viewable at http://www.calcars.org/news-archive.html — there you can add CalCars-News to your RSS feed.) 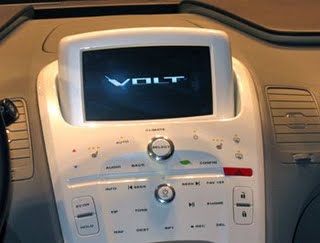 A local report about our fun event http://www.marinij.com/marinnews/ci_16923309 (with such short
notice, we didn’t get any national media), but ace cinematographer Chris Baldwin will be putting together some video).

Felix’s long piece about it putting plug-in cars in the context of the large challenges we face.

It ran at GM-Volt.com http://gm-volt.com/2010/12/22/calcars-plug-in-campaign-victory-after-8-years and garnered thousands of page views and over 140 comments in a day, including:

At Plug In America’s blog, Sherry Boschert, author of “Plug-In Hybrids: the Cars That Will Recharge America,” http://www.pluginamerica.org/drivers-seat/historic-calcars-prof-frank-get-plug-hybrid-chevy-volt, ended a posting,

The point is that Prof. Frank, Kramer, and Gremban helped propel a huge change in the auto industry.  I mean that will benefit our national security.  Also the environment and consumer pocketbooks. Our work isn’t finished — Plug In America and CalCars and our other allies have got a lot of educating of the public left to do.  So working for plug-in friendly policies, and more. But as these three pioneers take the keys to their new Volts.  Because it’s a moment to celebrate.