The new CT 200h hybrid electric car will be in showrooms later this month.  This time though Lexus wnet greener than usual and wants the world to know.  They will be giving the masses a 40 mpg hybrid EV that is sporty, has sexy styling, dynamic handling and very sustainable.

“This campaign had to convey the CT’s uncompromising personality and reach both current Lexus owners and new consumers through bold and engaging initiatives that hit their passion points,” said Dave Nordstrom, vice president of marketing for Lexus. “The result is a campaign that reflects the car itself – it’s energetic, passionate and very dynamic.” 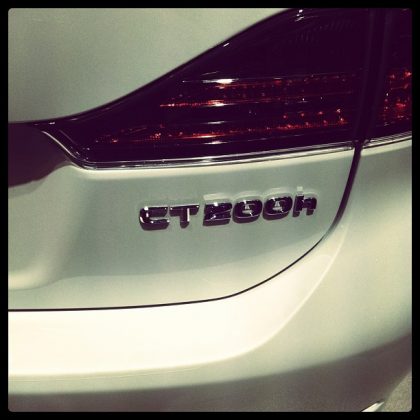 Escape. Challenge. Forge. Details.
The broadcast campaign includes four television commercials that demonstrate the “darker side of green” of the CT, a hybrid with aggressive styling and dynamic handling. Three of the spots make use of photo-real computer generated images with only the interior shots being live action.

They are even promoting its’ sustainability..

The first spot, “Escape,” expresses the desire to free yourself from the confines of someone else’s reality. In a starkly black and white graphic world, a Matador Red CT races through the streets in a hyperkinetic chase scene, intercut with images of the vehicle’s interior. The spot culminates as the CT approaches a brick wall on a dead end street. Instead of slowing down, the driver speeds up and smashes through the wall into a world of color. The voiceover reads, “Escape convention. Escape definition. Escape compromise… Welcome to the darker side of green.”

In addition to traditional elements, Lexus has entered into several unique partnerships, including an alignment with YouTube to sponsor “Girl Walks Into a Bar,” the world’s first feature film developed exclusively for online distribution. The automaker has also joined forces with Microsoft to develop a custom branded entertainment series entitled, “Fresh Perspectives.” The documentary style series features six artists, each commissioned to create three original pieces of work within 24 hours and inspired by the themes of Enrich, Escape and Empower.
Lexus will run print ads, take over the internet and deploy social media strategies in support of several of the campaign extensions.  Stay tuned because it’s about to get loud out there for the Lexus hybrid electric vehicle.