Since 2008, the North American record for the biggest solar installation on a single roof has been upped more than three times.  There are still two under construction.

However, in New Jersey, two projects have been announced that would double what is thought to be the current record for an installation, a FedEx facility in Woodbridge.  That’s just in the past two months!

Jersey Gardens Mall in Elizabeth announced plans for a solar installation on the mall’s roof. To be completed in August, it will produce 4.8 megawatts, 11 percent of the mall’s energy needs, according to numbers from PSE&G. 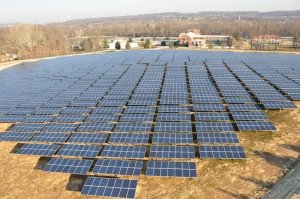 “People will start claiming that they’re the largest one,” said Alan Epstein of KDC Solar, which will own and operate the Carteret project.

“It’s like a fish story, to a certain extent,” he said.

“Along with the rest of the solar industry, we follow where the incentives are,” said Christina Skellenger, development manager for Gerding Edlen, which coordinated the Jersey Gardens project. “We probably do 50 to 75 percent of the work that we do in New Jersey.”

“New Jersey’s market is certainly more mature than any other state, other than California,” Kann said. “Last year was a great year, (and) 2011, we also expect to be a very strong year in New Jersey.”