Cyclone Power Technologies Inc. (Pink Sheets: CYPW) announced that its licensee Great Wall Alternative Power Systems Ltd. has completed the first important milestones in the prototyping stages of its License Agreement. These targets include completing the design and IP transition work, and assembling their engineering team, needed to commence production of the initial Cyclone engine prototypes for the China market.

“We have created the basis for what I consider from my years involved with U.S. defense projects, an ‘engineering center of excellence’,” stated Keith McDade, VP of Technology and Engineering of Great Wall, in charge of overseeing design, development and IP protection for the Cyclone technology in China.

“We are committed to the highest level of quality in our engineering, and we expect this attention to detail and performance to define the products we develop utilizing Cyclone’s technology.”

Great Wall anticipates commencing building of initial engine prototypes this quarter. Their current focus is on the Cyclone WHE-25 for use with biomass-to-power generator systems. These will include distributed combined heat and power (CHP) applications, and power sources for bio-char based environmental remediation (water and soil) equipment. Subsequent development will include Cyclone’s Mark V and larger engines.

“We see a massive market developing for distributed power in China’s rural areas,” stated Great Wall’s Managing Director, Robert Devine. “The first demand driver will be government-financed projects focused on cleaning up water and soil pollution in rural China. With Cyclone, we can deliver a viable biomass-based solution that combines distributed power and environmentally beneficial byproducts to support these efforts locally and at low cost.”

Managing Director Robert Devine has over a decade’s experience investing in the PRC’s consumer goods, technology, media and real estate sectors, initially with a well-known US private equity group then later on his own account. Keith McDade, recruited from the US to be VP of Technology and Engineering, has a 20-year successful track record in engine systems engineering and management with companies such as Boeing, Pratt & Whitney and Airbus. Mr. McDade also has previous work experience in China. 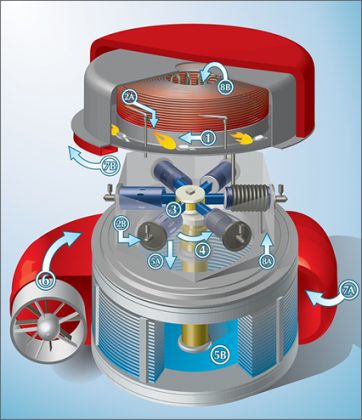 The Cyclone Engine is a Rankine Cycle heat regenerative external combustion engine, otherwise known as a “Schoell Cycle” engine.   It creates mechanical energy by heating and cooling water in a closed-loop, piston-based engine system.  The process looks like this:

1. Fuel is atomized and injected into the patented centrifugal combustion chamber (shown as lifted off the engine block for better viewing), where a spark ignites the fuel-air mixture into a flame that spins around the heat coils. Thermocouples (not pictured) control the duration of combustion to keep the heat in the combustion chamber at a constant temperature.

2. Water contained in the coils becomes super-heated steam (up to 1200°F) in as little as 5 seconds from start up which is (a) piped to the cylinders, (b) where it enters through a patent-pending valve system (not pictured). Note, valve timing mechanisms regulate how much steam enters the cylinders – the longer the cut-off the greater the torque and acceleration.

3. Steam enters the six radial-configured cylinders under pressures up to 3200 psi to push the pistons down in sequence. Note, no motor oil is used – water is both the working fluid and engine lubricant. Also, because of the valve design, the engine starts without the need of a starter motor.

4. The rotating action of the pistons connected through a patent-pending spider bearing (not pictured) turns the crank shaft. Note, because the greatest amount of torque occurs at the first rotation, the shaft can be directly connected to a drive train without a transmission.

5. Steam escapes the cylinders through exhaust ports and (a) enters the patent-pending condensing unit where it turns back into water, and (b) collects in a sealed pan at the bottom of the condenser. Note, this is a closed-loop system – the water does not need to be replaced or topped-off.

6. Blowers spin fresh air around the condenser to speed the cooling process.

7. (a) Air which has been pre-heated from the condensing unit, (b) continues up to a second heat exchanger located in the exhaust port of the combustion chamber, further pre-heating the air used for combustion while also cooling the exhaust fumes (to about 320°F).

8. A high pressure pump (not pictured) pipes water from the collecting pan to the heat coils (a) via heat exchangers surrounding each of the cylinders (only one pictured), and then (b) to the center of the coils to start the heat cycle again.