Yes, I was at the 2011 Popular Mechanics Breakthough Awards.

The 2011 Popular Mechanics Breakthrough Awards honor innovators whose work will transform the world in years to come. They are reinventing the wheel—or, rather, the cell tower and the internal combustion engine; reaching new heights in wind power and space exploration; and figuring out clever new ways to clean up and observe the environment. They’re even helping the paralyzed to regain use of their legs. They’re determined and brilliant—and we can’t wait to see what they’ll do next.

James Cameron was the main honoree but there were so many others (we’ll get into them at another time..).  However, I was pleased to follow up on an interview I did with James Cameron at the 2010 Environmental Medial Association awards ceremony about the gulf oil spill. We agreed that the panhandle of Florida has environmental dead zones from the Mississippi part of the Gulf Oil Spill.

James added that he was on the Gulf Coast oil spill caused by BP and his recommendations were what BP used in the first place!!  Had they actually taken his suggestions earler (versus waiting for the government report) they would have cleaned up the Gulf Coast six months earlier!!  Oye vay!

I then brought up to him how I didn’t understand some people…you know.  For my Master’s Degree I was inside the World Bank doing an interview of this project manager for China building coal powered projects!!  I said to him basically what the heck or f&%%^%^ are you doing putting Coal Burning Powerplants in China?!  I think I even added that don’t they have enough problems with smog and coal?!!!

In some round about way the guy from the World Bank stated that solar, wind, tidal, combined cycle were far away technologies. This was in 1997 my friends!

James added that some people just don’t want to get it.  It makes sense.  I guess it’s because it’s so apparent that it’s to obvious of the right choice to use renewable energies versus placing those coal burning powerplants in the middle of China.

What I liked the most was that Cameron got it when it comes to Green Lighting.  He added that this book is needed and that if we just did that, we could save this economy!!  HE IS CORRECT AND I WILL BE WRITING A PIECE ABOUT THAT SHORTLY!  BEEN WORKING ON IT FOR A WHILE NOW SO THIS’LL BE A GOOD ONE! 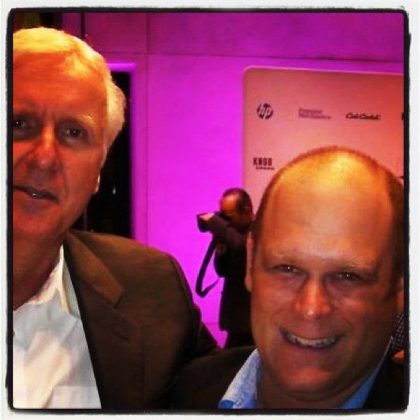 Then he took the book to the shoot with Sigourney for the press!!! Wow!! Coolness! Good for him and hopefully we can get some great green media out there for everyone! Stay tuned…Best part is I left him my book so he doesn’t have to ask if I can write. You know!!??

More importantly, James won an award for his amazing technological breakthroughs in the movie Avatar. His facial recognition technology or as Popular Mechanics stated the: 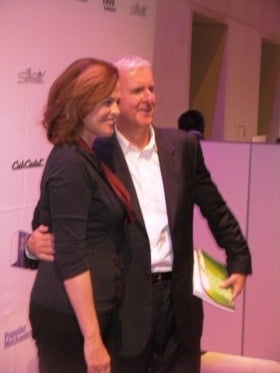 To present Cameron with the award, they brought in the amazing Sigourney Weaver.   Wow!  Talk about a double whammy!!

James Cameron said to Sigourney Weaver after accepting the 2011 Breakthrough Awards from Popular Mechanics: “I think we both enjoyed the creation of your character Grace from Avatar – what I was trying to do in writing that character was to celebrate science and the mind and passion of a scientist, which is really all about curiosity.”

Some of the Top 10ish statements of the night were:

Sigourney Weaver:
On the award winners and their accomplishments: “This is where science-fiction is coming alive before our eyes.”

On presenting James Cameron with the Breakthrough Leadership Award: “How could I resist coming tonight to help honor and annoy a man who I’ve known since I first woke up from a deep, cryogenic sleep?”

“I think we both enjoyed the creation of your character Grace from Avatar – what I was trying to do in writing that character was to celebrate science and the mind and passion of a scientist, which is really all about curiosity.”

“I think curiosity is the most powerful thing that we have as human beings, it really binds us and drives us to create all of the things that you see around you, just in terms of daily life.”

On how Popular Mechanics inspires scientists and innovators:
“To me, it connects the dots, it says, not only are these things possible, not only are we this great inventive species, but you, get up, throw that magazine down, get up off your ass and get out there and make something.”

On bridging the divide between “humanistic filmmaking” and technical filmmaking: “I think we’re technical beings and I think that our relationship with technology is what defines us, and of course, our emotions and our foibles and our relationships and all those things.  As an artist you have to pay proper service to both, but I think who we are is a technological species.”