The legislation (H.R. 1799) is the culmination of more than six years of locally-driven effort that has built strong support across western Maricopa County from an array of conservation organizations, businesses, military interest groups, churches, developers, and West Valley elected officials. The roughly 954,600 acres of public lands encompassed by the bill are west of the White Tank Mountains, and are managed by the Bureau of Land Management (BLM). There are no private lands or exchanges in the legislation. The bill calls for a mixture of wilderness, national conservation areas (NCA), and special management area designations to be created on the BLM lands.

A report issued last week from the Tucson-based Sonoran Institute and the Arizona Wilderness Coalition shows long-term, no-cost benefits of legislated conservation measures to support Arizona’s military operations from Luke Air Force Base, MCAS Yuma, the Western Army Aviation Training Site in Marana, Davis-Monthan Air Force and the 162nd Fighter Wing in Tucson—all of which use the Barry M. Goldwater Range (BMG) to train their personnel in flight or land-based combat maneuvers. The legislation could result in the permanent protection of 80% of Maricopa County BLM lands under military training routes (MTRs)—more than 650 square miles of additional protective designations—nearly doubling the amount that is protected today.[i]

“Legislative measures that conserve federal lands around military installations can accomplish a number of fiscally prudent benefits for the Department of Defense,” says Jim Uken, retired director for the Barry M. Goldwater Range (BMGR). “In a tough budget environment, preserving lands for wildlife outside of the BMGR helps the Department of Defense avoid costly endangered species mitigation measures down the road as Arizona continues to grow and develop.”

The Readiness and Environmental Protection Initiative (REPI) within the Department of Defense was specifically created to combat encroachment issues such as housing development, commercial communications structures, lighting, or any other external activity that inhibits military readiness. In FY 2012 alone, REPI spent $215 million securing lands outside U.S. military facilities for conservation mitigation and buffering purposes; combined with military branch funds and community partner funding, the total expenditures for enhancing compatibility of military installations was $784.5 million for FY 2012.[ii]

The Arizona Sonoran Desert Heritage Act of 2013 is supported by military advocacy groups and retired military personnel for its potential to prevent encroachment around Luke Air Force Base and keep the Barry M. Goldwater Range viable as a world-renowned training area for the Department of Defense.

“Fighter Country Partnership has supported the Sonoran Desert Heritage plan from the beginning,” says Ron Sites, president of Fighter Country Partnership. “The proposal protects open areas, which in turn supports the mission of Luke AFB by providing airspace to train without the
impact of incompatible development. Luke’s mission is to train the world’s greatest fighter pilots and unencumbered training airspace is needed for the long-term mission viability of the Wing. That need will continue with the arrival of the new F-35 Joint Strike Fighter aircraft.” Fighter Country Partnership is an advocacy organization supporting the men, women, families and mission of Luke Air Force Base based in Glendale.

With over 7,000 employees and a financial impact of over $2.1 billion annually, Luke Air Force Base is critical to the state of Arizona’s economic viability. Together with the eight other military installations that train in air space over western Maricopa County and on the Barry M. Goldwater Range, the economic impact to Arizona communities from military facilities totals approximately $9 billion.[iii]

“It cannot be overstated that the future fiscal climate will require us to think creatively about protecting military facilities and training routes with no-cost conservation designations like those in the Sonoran Desert Heritage proposal,” says Uken.

“If development catches up with us, we’ll never be able to buy our way out. In the recent past, Arizona has proactively responded to threats to our military mission, acting before the risks became reality. I trust that our representatives in Washington will do the same by moving the Arizona Sonoran Desert Heritage Act toward adoption,” Uken says.

The legislation will enhance the evolution of West Valley communities into gateways for premier outdoor destinations. According to the Department of the Interior, recreation visits to Interior-managed lands result in over 316,000 jobs and nearly $25 billion in economic impacts each year to the communities and regions surrounding Interior-managed lands. In Arizona, outdoor recreation generates $10.6 billion in consumer spending per year, more than 100,000 direct Arizona jobs, and $3.3 billion in wages and salaries for Arizonans.[iv]

“Public lands in Arizona are drivers for our economy,” says Dave Richins, director of the Sun Corridor Policy Program with the Sonoran Institute. “Arizona’s conserved public lands and open spaces attract a high skilled work force that sets us apart from the rest of the country. And we all know that tourists from around the world come here to visit our iconic landscapes. As an added benefit, land in this proposal prevents incompatible development from key training routes for Luke Air Force Base. This is a win-win-win for our economy.”

Much of the area identified in the bill can be found within a short driving distance of greater Phoenix. Proximity of these lands to the West Valley’s growing urban centers necessitates careful management to minimize the impact of residents and tourists on wildlife habitat across this iconic Arizona landscape.

“I was born and raised in Buckeye, and I can tell you how special these lands are to the Arizona way of life,” says Mayor Jackie Meck of the Town of Buckeye. “If we allow our desert, mountain ranges, and hunting areas to be lost, we will never get them back.” Buckeye is one of many communities that sits at the edge of the proposed conservation lands and is projected to become one of Arizona’s largest cities.

“It’s tremendous for such a large urban area, such as Maricopa County, to be able to live side by side with the nearly one million acres proposed by this bill,” says Maricopa County Supervisor Mary Rose Wilcox. “We must preserve our heritage and never lose it because of urban sprawl.”

The bill creates two National Conservation Areas (NCA), and within those NCAs, designates new wilderness areas, some as additions to previously-designated wilderness and several new wilderness units in the existing Sonoran Desert National Monument. The legislation also creates two Special Management Areas primarily for preserving wildlife connectivity corridors identified through Arizona’s Wildlife Linkages Assessment. The area is predominated by rugged terrain that provides an escape for hikers, hunters, and outdoor enthusiasts of every kind. It is also home to a wealth of wildlife, from bighorn sheep to the desert tortoise and the Gila monster, bobcat, mountain lions, and more than 300 species of native birds.

“Landscape-scale habitat conservation is an important component of wildlife management,” says Tom Mackin, president of the Arizona Wildlife Federation. “The Arizona Wildlife Federation remains open to working with Congressman Grijalva and the rest of the Arizona delegation to ensure that responsible wildlife management remains at the forefront of this legislation and is inclusive of management tools necessary for wildlife to continue to thrive in the Sonoran Desert.”

“We want to see this area protected as wilderness for future generations of families like ours,” says Ella Pierpoint, who with her husband Roy, have farmed near the Red Rock Canyon proposed wilderness unit since the 1970s. “Someone can come out here and view the petroglyphs and the cultural features 1,000 years from now and that’s heritage we can pass on to the people who come after us.” The Pierpoints serve as official Site Stewards for the state of Arizona and monitor Red Rock Canyon and several other sites along the Gila River for resource damage.

Cultivating Support from the Arizona Delegation

Proponents of the legislation want to secure co-sponsorship of the Arizona Sonoran Desert Heritage Act from other members of Arizona’s congressional delegation.

“This entire process has culminated in one of the finest collaborative conservation efforts Arizona has seen since the 1990 Arizona Desert Wilderness Act,” says Les Corey, executive director with the Arizona Wilderness Coalition (AWC). “AWC and our partners have been working for more than 20 years to honor the collaborative spirit of Congressman Mo Udall, who made bi-partisan conservation a top priority in his home state of Arizona and around the nation. We hope this dynamic legislative package will help shape a new era of conservation in the West. It’s now up to Congress to embrace that opportunity.”

“The Arizona Sonoran Desert Heritage proposal has been shaped both by the needs of the land and by the needs and desires of different stakeholders within our larger communities,” says Mike Quigley, Arizona representative for The Wilderness Society. “The result is a proposal that has been carefully crafted to balance multiple uses and to provide for future generations the many benefits of our wonderful and special Sonoran Desert.” 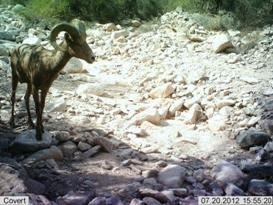 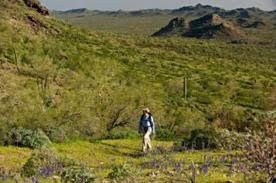 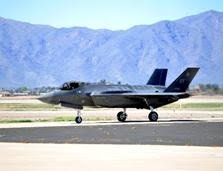 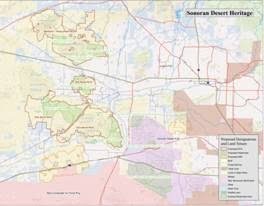