Oh boy Did Green Living Guy love the #GoFurther Ford Motor Company Trends Conference!  This was my instagram post on this! Hey I’m @greenlivingguy at the #gofurther #fordtrends conference. I took the stage to prove it too!

First off, Ford Motor Company announced the My Energi.  My Energi a first-of-its-kind idea. That’s a powered vehicle with the potential to deliver the best of what a plug-in hybrid offers   This is without depending on the electric grid for fuel. 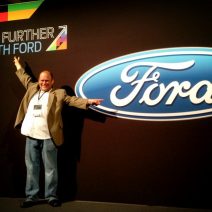 So instead of powering its battery from an electrical outlet #GoFurther, Ford C-MAX Energi harnesses the power of the sun with Sunpower solar. Therefore, by using Sunpower it acts like a magnifying glass. It is directing intense rays to solar panels on the vehicle roof.

So finally, what else is too cool?

A concept taking solar and re-powering the house. This is to deliver the same performance as the conventional C-MAX Energi plug-in hybrid. Furthermore, with #GoFurther campaign and when plugged in it draws power from the electric grid. As well, Ford C-MAX Energi gets a combined best miles per gallon equivalent in its class. Also, with EPA-estimated 108 MPGe city and 92 MPGe highway, for a combined 100 MPGe.

2012 #GoFurther Conference for @Ford in the Detroit Lions Stadium I posed with my book Build Your Own Electric Vehicle, 2nd edition by a @Ford Focus EV