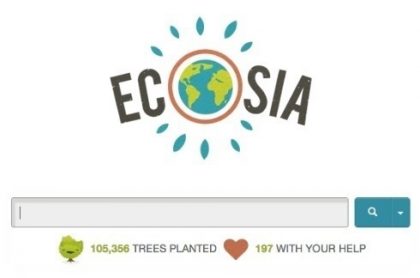 Search engine Ecosia.org is literally growing by the minute — with the upward trend helping it plant more than 10,000 trees every week

BERLIN — The green search engine Ecosia is now planting one new tree every 60 seconds, a growth rate it says could spell the end of deforestation.

The German search engine, which donates 80 percent of its advertising revenue to a tree planting program in Brazil, has planted more than 100,000 trees in the past 10 weeks.

A driving issue behind the COP19 in Warsaw, tropical deforestation accounts for up to 17 percent of the worldwide CO2 emissions, making it one of the most important factors in climate change. Early 2013 also saw a spike in deforestation of the world’s largest rainforest in Brazil.

“We have 2.5 million users worldwide,” Ecosia founder Christian Kroll said. “If Ecosia had as many users as Google, we could have the chance to end deforestation once and for all.”

Ecosia is a social business with the mission of making the world a more sustainable place. The search engine is 100-percent CO2 neutral, publishing both its neutralization certificates and donation receipts online.

At the rate of one tree per minute, Ecosia is on its way to meeting its goal of one million trees planted in the next year. The search engine, which is an official partner of The Nature Conservancy, has already generated more than $1.7 million for the environment.