Researchers at the University of California, Davis, have used laboratory studies to estimate the risk to young green sturgeon, which may be killed by unscreened pipes that divert water from the Sacramento River into adjacent farm fields.

The study confirms that this ancient protected fish species may be jeopardized by the current system of water diversion pipes. The findings also suggest that the threat could be lessened by diverting river water more slowly and over longer periods of time, meeting agricultural needs while conserving the green sturgeon populations.

The researchers report the study results this week in the online journal PLOS ONE at: http://www.plosone.org/article/info%3Adoi%2F10.1371%2Fjournal.pone.0086321

“Our work highlights the potential danger that unscreened water diversions pose to migrating juvenile green sturgeon — a risk that is poorly understood for this species,” said Jamilynn Poletto, a doctoral student in the laboratory of the study’s lead researcher Nann Fangue, an assistant professor in the Department of Wildlife, Fish and Conservation Biology.

Sturgeon are one of the largest and oldest families of bony fish in the world, with 15 of the remaining 25 species listed as critically endangered due to over-fishing, habitat changes and habitat loss.

One of those endangered species is the green sturgeon (Acipenser medirostris), which lives in coastal waters of the Pacific Ocean, from Alaska to Mexico. A specific population of these green sturgeon spawn only in the Sacramento River and is listed as threatened under the U.S. Endangered Species Act.

Unscreened agricultural water-diversion pipes that line the Sacramento River banks and levees have long been considered a threat to native fishes, but there has been limited data assessing their impacts. Water is diverted from the rivers for agricultural use at more than 3,300 locations throughout the Sacramento-San Joaquin Watershed, and 98 percent of the diversion pipes are unscreened, posing a significant threat to juvenile green sturgeon.

Fish drawn into the pipes are either killed directly by water pumps or die when they are stranded in seasonally irrigated canals, ditches and fields when the water supply is withdrawn.

In an effort to quantify that threat, Poletto, Fangue and their colleagues simulated river conditions with an experimental flume, complete with an unscreened diversion pipe, angled bank and flowing water. The study was conducted in collaboration with the J. Amorocho Hydraulics Laboratory, which is run by M. Levent Kavvas, a UC Davis professor of civil and environmental engineering.

The research team found that a surprisingly large percentage of the young sturgeon placed in the flume was drawn into the unscreened pipe. Data from the study estimate that up to 52 percent of green sturgeon that pass within 1.5 meters of a water diversion pipe just three times could become irreversibly drawn into the pipes.

The researchers suggest that this difference between the sturgeon and the salmon could be explained by the fact that the sturgeon have fewer sensory organs that detect changes in water velocity than do the salmon.

The study also demonstrated that a 50 percent reduction in the flow of water through the diversion pipe resulted in a 78 percent decrease in the number of fish drawn into the pipe.

The researchers note that extrapolation of their findings to in-river conditions must be done with caution, but they suggest that new water diversion strategies, such as slowing the rate of water diversion, might be successful in balancing agricultural needs in the Sacramento Valley with fish conservation priorities.

“To create effective management strategies for green sturgeon and other native fishes, we first must understand the factors like these water diversions that could be impacting population declines,” Fangue said.

The study was funded by the California Department of Fish and Wildlife’s Ecosystem Restoration Program, the UC Agricultural Experiment Station, the U.S. Department of Interior’s Anadromous Fish Screen Program, and the National Science Foundation. 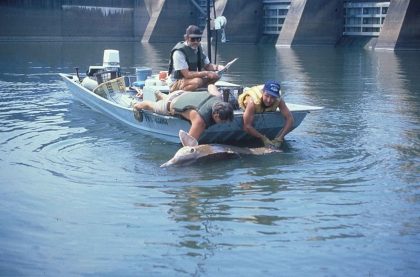