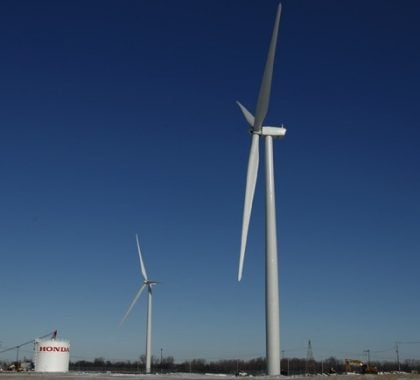 RUSSELLS POINT, Ohio, January 9, 2014 – Consistent with Honda’s long history of innovation and the company’s commitment to reduce CO2 emissions, Honda Transmission Mfg. of America, Inc., has finalized installation and will begin operation of two power-producing wind turbines next week at its plant in Russells Point, Ohio, through an agreement with a subsidiary of ConEdison Solutions of Valhalla, NY.

The installation of the turbines means that the plant will be the first major automotive manufacturing facility in the United States to obtain a substantial amount of its electricity directly from wind turbines located on its property. Honda Transmission will also reduce CO2 emissions through the use of this renewable energy source.

Studies commissioned by Honda Transmission indicate that wind-generated power is a cost-effective source of electricity for the plant and that the project will not adversely impact local wildlife or the environment. The two wind turbines will supply approximately 10 percent of the plant’s electricity. Based on their location and actual wind speeds, combined output from the two wind turbines is estimated at 10,000-megawatt hours (MWH) per year.

The decision to go forward with the project followed completion of a thorough evaluation of renewable energy sources for the plant, which Honda announced in February 2012. The turbines, with blades approximately 160 feet long, have been installed on 260-foot towers on Honda Transmission property, which is suited for a maximum of two wind turbines.

“We appreciate the support we have received from the township and our neighbors throughout all phases of the project that will help Honda work toward our goal of reducing CO2 emissions,” said Gary Hand, Vice President of Honda Transmission. “This is just one of many ways that Honda is seeking to reduce our environmental footprint.”

“We are proud to be helping Honda strengthen its status as a national leader in sustainability,” said Jorge Lopez, CEO of ConEdison Solutions. “Through the example set by Honda, the American manufacturing sector will see more ways it can incorporate renewable power into its facilities.”

ConEdison Solutions, one of America’s largest energy services companies, will own and operate the two turbines, through its subsidiary, RP Wind, LLC. The company is working in collaboration with Juhl Energy of Pipestone, MN, a leading provider of clean energy solutions, which served as the primary developer of the project. Through agreements with Honda Transmission, ConEdison Solutions will generate electricity for the plant, and be responsible for an interconnect agreement with the Logan County Electric Cooperative and an additional agreement with Buckeye Power, Inc., an Ohio electric cooperative.

“We are honored to work with Honda and ConEdison Solutions to provide wind energy at the Russells Point facility,” said Corey Juhl, Vice President of project development for Juhl Energy. “By assisting in the installation of these two wind turbines next to their manufacturing facility, Honda is making tangible and immediate progress towards reducing CO2 emissions.”

Globally, Honda has established voluntary goals to reduce the environmental impact of its products and manufacturing operations by 2020. This includes a 30 percent reduction in CO2 emissions from Honda products, and significant CO2 reductions from the company’s plants and other operations, compared with year 2000 levels.

To achieve these new environmental targets, Honda is accelerating its efforts to advance the environmental performance of its products, and its operations throughout North America. The wind turbine project is among a number of other initiatives at Honda plants to reduce energy use and waste from manufacturing operations.

Honda is a leader in the development of leading-edge technologies to improve fuel efficiency and reduce CO2 emissions, both in its products and manufacturing operations, as well as from logistics and distribution of its products and parts.

Two Honda automobile plants in Ohio have earned the U.S. Environmental Protection Agency’s (EPA) ENERGY STAR certification for the eighth consecutive year, while a Honda auto plant in Indiana earned the designation for the second time in 2013, boosted by energy efficiency gains from the start of a second shift of auto production.

Honda of America began production of the Accord Hybrid sedan at the Marysville Auto Plant in fall 2013. This will be the third hybrid model built by Honda in America, joining the Civic Hybrid and Acura ILX produced at Honda Manufacturing of Indiana, LLC in Greensburg, Ind.

Honda has developed numerous technologies to improve the fuel efficiency and reduce CO2 emissions from its products, including the just released 2014 Honda Accord Plug-In Hybrid, the Fit EV, Civic Natural Gas and the Honda FCX Clarity fuel cell electric vehicle.

Honda has also led the Union of Concerned Scientists (UCS) rankings of overall vehicle environmental performance since 2000, and a Honda vehicle has topped the list of America’s greenest vehicles from the America Council for an Energy-Efficient Economy (ACEEE) for 15 consecutive years.