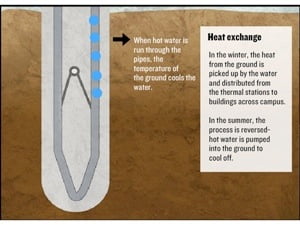 In the shadow of two outdated smokestacks and four antiquated coal-fired boilers, Ball State has started the second and final phase of converting the university to a geothermal ground-source heat pump system – the largest project of its kind in the United States.

The conversion, started in 2009 to replace the coal boilers, now provides heating and cooling to nearly half the campus. This phase of the project will be dedicated in March.

When the system is complete, the shift from fossil fuels to a renewable energy source will reduce the university’s carbon footprint by nearly half while saving $2 million a year in operating costs.

Under the direction of Jim Lowe director of engineering, construction and operations, work has begun on Phase 2, which includes installation of 780 of the remaining 1,800 boreholes in a field on the south area of campus.

Construction will continue throughout 2013-2014 and will include a new District Energy Station South containing two 2,500-ton heat pump chillers and a hot water loop around the south portion of campus. The system will then connect to all buildings on campus – eventually providing heating and cooling to 5.5 million square feet.

“When costs began to escalate for the installation of a new fossil fuel burning boiler, the university began to evaluate other renewable energy options,” Lowe says. “This led to the decision to convert the campus to a more efficient geothermal-based heating and cooling system.”

The project has caught the attention of universities and communities across the nation. Lowe is sharing information about the university’s new operation with others who want learn how they too can benefit from a geothermal system. 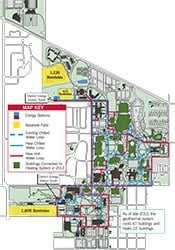