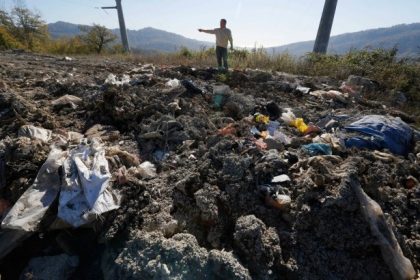 Illegal waste dumps, displacement of residents, harsh retribution against local activists: Sochi has it all.

The sochi olympics are already infamous for being the most expensive in history. But corruption-inflated construction contracts aside, there is also a huge environmental and human cost to building the Games from scratch, at breakneck speed. It can’t be calculated in a single figure, but it’s found in places like the Sochi-area village of Uch-Dere, where smoke from underground fires pours out of a sprawling construction waste dump polluting the neighboring river; in village of Akhshtyr, where quarrying has dried up the wells and covered residents’ fruit in dust; and in the village of Vesyoloye, where construction waste dumping triggered a landslide that ruined homes. The activists who try to fight these abuses have been harassed, jailed and, in the case of at least one environmentalist, looking at prison time.

“The Russian government took on an obligation to protect the environment and it didn’t fulfill it, along with many other obligations to the residents of Sochi. That’s the worst part,” says Yevgeny Vitishko, an activist with Environmental Watch on North Caucasus (EWNC). In its Sochi bid, Russia pledged to hold the cleanest Olympic Games ever under a “Zero Waste” program, a promise that now rings hollow.

Much has been made of the fact that the Winter Olympics will be held in subtropical Sochi, which stretches ninety miles along the Black Sea in Russia’s warmest region. Despite having virtually no stadiums or ski hills, the location was championed by President Vladimir Putin, who has staked his reputation on the Games’ success. Nearly everything was built from scratch, at tremendous cost.

Besides its warm climate, the Sochi area is known for its ecological richness and diversity. In 1999, UNESCO declared the Caucasus State Biosphere Nature Reserve and parts of the Sochi National Park a world heritage site, noting natural phenomena including caves, high-altitude lakes, rivers, waterfalls, and abundant flora and fauna. Many types of orchids have been cataloged here, and dolphins are a common sight along the beaches.

But the Worldwide Fund for Nature Russia, Greenpeace Russia, EWNC and others have been warning of the harmful ecological effects of Olympic preparations, including recent legislative changes easing regulations on construction in environmentally protected areas. “We thought that the Games were inappropriate in the places they chose,” Vitishko says.

The coastal cluster of venues was built atop the Imeretinskaya Lowland, renowned for its rich bird life. With the start of Olympic building, much of it was filled in with construction waste, and now the 40,000-seat Fisht Olympic Stadium, which will host only the opening and closing ceremonies, sits in the lowland.

Meanwhile, EWNC activist Vladimir Kimayev says the group has found eight quarries of questionable legality around Sochi, including limestone quarries in Sochi National Park that the prosecutor general confirmed had partially filled in a stretch of the Psou River. In a 2011 letter, the prosecutor general’s office said it had brought charges over two illegal quarries there. One was operated by state-owned Russian Railways on land rented by the state Olympic construction company Olympstroy, as part of the highway and railroad project Russian Railways was building between the coastal and mountain clusters. As of mid-January, these quarries were still operating, according to Kimayev.

EWNC also knows of 1,500 unsanctioned waste dumps around Sochi, of which about two dozen are large-scale, and has been able to document four illegal dumps receiving Olympic construction waste, Kimayev says.

For the entire story on The Nation