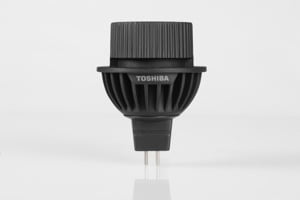 Toshiba International Corporation, October 24, 2012 – In keeping with its reputation for providing innovative LED lighting solutions that meet the needs of the marketplace, Toshiba International Corporation announced the introduction of its new MR16 GU5.3 LED lamp that generates up to 540 lumens. Toshiba’s new MR16 GU5.3 500 series is a direct replacement for 50W halogen lamps.

Using only 9.1 watts of energy, Toshiba’s new MR16 provides huge energy savings compared to conventional halogen lamps that use over five times the wattage for the same lumen output. MR16s are ideal for a variety of applications that require directional light, such as track lighting, recessed ceiling lights, desk lamps and pendant fixtures.

The new MR16 is available in three color temperatures, 2700K, 3000K and 4000K, and two beam angles, 25 and 35 degrees. Toshiba is among a small number of major lighting manufacturers who have introduced an MR16 LED lamp that produces 500+ lumen output.

“This new lamp is just another addition to our extensive line of PAR, MR, BR, A19 and candelabra lamps designed to meet the discerning needs of lighting designers, architects and facility managers,” added DallePezze. “All total, our current lamp line up exceeds 70 SKUs with roughly 75 percent of those being ENERGY STAR qualified.”

Toshiba’s new MR16 is dimmable, contains no mercury or lead and lasts up to 20 times longer than a halogen bulb. It emits up to 70 percent less UV rays and uses up to 80 percent less energy compared to halogen lamps. The lamp is also specially designed to fit most gimbal rings, which means it can be used in most existing fixtures.

As one of the largest lighting companies and LED lamp manufacturers in the world, Toshiba is dedicated to creating high quality light, while keeping energy consumption low. One hundred percent of Toshiba’s current lighting product offering and lighting product development in the U.S. is based on LED technology.