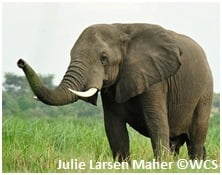 Game-Changing: Plan Includes Marshaling All Federal Agencies to Address Wildlife Crime and a Ban on Trade in Elephant Ivory

Washington, DC – February 11, 2014 – The following statement was released today by WCS President and CEO Cristián Samper, who also serves as a member of the United States Advisory Council to the Presidential Task Force on Wildlife Trafficking:

“Today’s release by the Obama Administration of the National Strategy for Combating Wildlife Trafficking and the issuance of a ban on trade in elephant ivory are an unprecedented and historic step by any government to commit all aspects of its operations behind addressing this crisis. The United States is fully committing to take on this transnational organized crime from all angles by marshaling resources across all executive branch agencies and by taking steps to make our domestic laws tougher on wildlife criminals.

“The inclusion of a ban on commercial ivory trade is a game-changing element which shows how intent the administration is on pursuing real solutions. The announcement of this ban comes as more than 111 partners and more than 100,000 people have sent letters to the administration asking for moratoria on ivory sales through the public awareness campaign, 96 Elephants. We will continue to work with Congress and local and state governments to close any existing loopholes in the commercial ivory trade laws and we will work to strengthen the penalties.

“The poaching crisis facing elephants, tigers, rhinos, sharks and other wildlife demands this type of meaningful action, if we are to keep these species thriving into the next century and beyond.

“I am encouraged to see a unified, cross-cutting plan, including an emphasis on site-based conservation action, which will better equip the United States to take on all facets of this crisis – stopping the killing, stopping the trafficking, and stopping the demand.

“The new strategy places a focus on strengthening enforcement, domestically and globally; by building international cooperation, commitment and public-private partnerships (including using trade agreements and international agreements and arrangements, like CITES); and reducing demand — through awareness activities — for ivory and other wildlife products from endangered and threatened species.

“The Wildlife Conservation Society is a committed partner with the U.S. government and many other partners around the globe addressing the urgent issue of wildlife trafficking. We applaud this announcement from the White House today, which emphasizes collaboration, and we look forward to working with the administration, governments, communities and other NGOs on implementation.

“As governments and NGOs meet in London this week to address wildlife trafficking, the United States is sending a clear sign that it intends to lead by example on this issue. I am honored to be a member of the advisory council which helped to inform today’s recommendations and we applaud President Obama’s leadership.”