Well, this one was a surreal night to say the least.  Here is the story back in 2009 for the Food Network and my buddy Evette Rios (buddy of Rachel Ray); celeb to The Chew.

I arrived at the Nicotras Ballroom at the Staten Island Hilton and my friend Steve Juvelier calls me.  I tell him where I am and what I am doing and he couldn’t believe it.  “Leitman???”, he says.

It’s a running joke Options between us which means the joke that I am the one who is the writer for my website and The Food Network charity event called The Green Gala hosted by Evette Rios from the Rachel Ray show.  I have been green and I love food!  Well, as one great boxing referee use to say to the opponents in the ring after he gives them the rules, “Let’s get it on!” 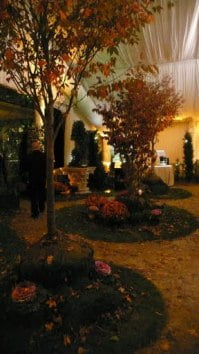 Also, the charity event that I was able to experience was a Food Network Good Food Gardens Program.  It is to build local farms in urban areas so that everyone can get organic foods.  That sold me right there and I give Evette and the Food Network credit for the cause.

Anyway, I walk into the hotel area a little early to hopefully get an early view and amazed.  It was surprisingly beautiful.  Candles lit the entire room with 16 trees around the tables for auction.

Leaves filled the floors and were perfectly placed as not to have someone trip.

Ironically I just received information today that we need to plant 29 trees to handle each persons CO2.  So, let’s jack that up next time heh!!  Just kidding Evette!

The red tables were all decked out in Pomagranates and berries burlap runners by Julie Newton.

The yellow table, flowers by http://www.carolsflorist.com/

As I walked to the left of the entrance I saw Prarie Organic Vodka and was handed an apple cider martini laced with gold.  That got me thinking about this one time with me and Goldschlager but we won’t got there today!  The drink tasted rich and sweet with a nice kick apple cider oh I mean Prarie Organic Vodka.  Tasted just right to start off the night at the Staten Island Hilton.

Then I heard that an Indonesian gentleman named Sonny Soemarsono was the cool at the Staten Island hilton and was cooking. Of course I had no idea who that was but then one of Evettes friends told me that he worked for the Rainbow Room in NYC.  Now I was pumped.

Evette told me as we walked to the back right of the room where our table was that all the bottles we recycled by her.  I looked at her dad and said, “Nice!  Tell me more.”  I guess there was a little wine involved but she kept the bottles for a party in the future.  Evette soaked the bottles in her bathtub to get the labels and glue off much easier.

These beautifully carved pumpinks covered every corner of the room so to see them in the front were really nice.  Then when I walked to the back I noticed that there were to other tables.

There were photographers, cameras, the whole thing.

I am not going to list every course and drink here but my favorites will stand the test of time.

The pumpkin filled with squash soup and some really great spices.

I’ll post the menu later but this was an amazing meal. 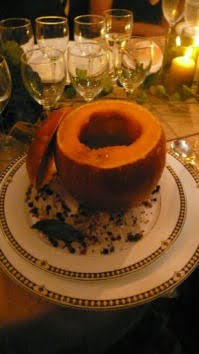 One of the fun parts of the night was hanging out with Evette, this cool guy Kevin Christiana from Project Runway and all of the crew seen here.

Thanks for the opportunity to meet, eat,drink and be merry under a great organic meal with fun people.  Kevin and I talked about our days in college.  Kevin mentioned he was in Tau Kappa Epsilon and I was in Alpha Epsilon Pi.  We both had leadership posts towards the end of our school careers and agreed we just had to get things done right we had to do it ourselves but it was so rewarding to provide positive change.  To me that was cool to hear him say because it shows just what I am doing now about the environment or Evette with this great event.  We just do it!