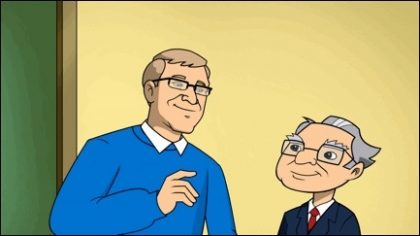 In The Gift, The Secret Millionaires Club kids visit an African village with a challenge from philanthropist Bill Gates to solve the community’s lack of electricity. Meanwhile, one club member’s competitive nature arises when a local boy’s invention threatens to outshine his own.

“We created Secret Millionaires Club with Warren Buffett to empower kids by helping them understand the world they live in, teaching them about the impact their decisions have on their own lives, as well as others’,” says Genius Brands International Chairman and CEO Andy Heyward. “The series features several prominent guest stars, and we are delighted that Bill Gates agreed to participate in this very special episode about how rewarding it can be to give back.”

“I was happy to join my friend Warren Buffett in an episode called ‘The Gift’ that helps underline the importance of giving for kids and addresses the need for clean energy and a healthy planet,” commented Bill Gates.

Secret Millionaires Club, created in partnership with and starring an animated Warren Buffett, features a group of kids who have adventures in business. Secret Millionaires Club empowers kids by helping them understand the world they live in, teaching them about the impact their decisions have on their own lives…and teaching them to have the confidence to be the best they can be. Along the way, they meet stars like basketball great Shaquille O’Neal, rapper Jay Z, singer, actor and comedian, Nick Cannon and, of course, Bill Gates, who impart words of wisdom from their own life experiences.

In addition to the series, the Secret Millionaires Club brand offers kids even more ways to learn with a new range of products created to enrich and inspire and all grounded in Warren Buffett’s life lessons. The new line includes “Business in a Box,” created in partnership with toy company TCG and exclusively sold at Toys”R”Us, which teaches kids how to grow their own business and the fundamentals of financial literacy through interactive play. On DVD from Cinedigm, Secret Millionaires Club: Volumes 1 and 2 are available on amazon.com. The new book, Secret Millionaires Club: Warren Buffett’s 26 Secrets to Success in the Business of Life by co-authors Amy Heyward and Andy Heyward and published by Wiley, features all of the same lessons included in the animated series and is available at amazon.com.