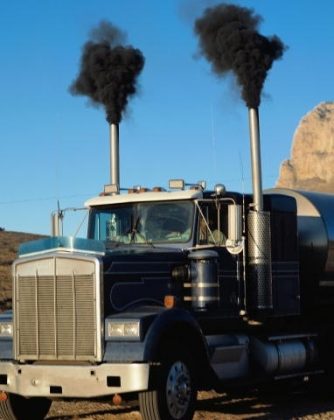 A modified diesel engine running on gasoline could be a way of significantly reducing truck emissions, according to research at Lund University in Sweden. New fuel efficiency standards for large trucks were announced by President Obama just last week. The method could halve fuel consumption for gasoline engines.

The engine has been developed to achieve the right amount of ignition delay; meaning a delay between fuel injection and combustion. During the ignition delay, the mixing that happens produces minimal amounts of soot and nitric oxide. In fact, it could mean a new generation of engines so clean they wouldn’t require catalytic converters.

It also means greater efficiency – the Lund University engine currently has 57% indicated efficiency, almost a world record. This translates into roughly 50% efficiency on the output shaft of the engine.

“A reasonably efficient engine today would be in the range of 40-42%. We’re hoping to achieve 60% with this type of PPC combustion process”, says Bengt Johansson, Professor of Combustion Engines at Lund University.

A higher efficiency could have a large impact on fuel consumption, and therefore also CO2 emissions. Big trucks consumed 28 billion gallons of gasoline in 2011 in the US alone, according to US Department of Transportation statistics.