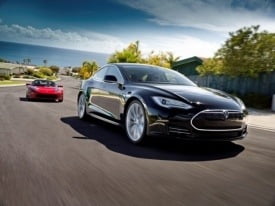 PALO ALTO, Calif., July 24, 2012 – TuneIn, a service that lets people listen to music, sports and news, today announced its 200th distribution platform. For the first time TuneIn has been made available directly in the vehicle without using a smartphone. TuneIn is providing more than 70,000 stations from the popular service directly to Tesla Model S, the world’s first premium electric sedan.

With TuneIn, drivers can easily and with minimal distraction listen to sounds from around the world, like reggae from Jamaica, rock from London or even folk from Antarctica. Beyond this unmatched music variety, TuneIn provides live play-by-play sports with ESPN Radio, talk radio from the likes of WGN and CBS, or comedy and concerts from a selection of over 2 million on-demand programs.

“TuneIn offers Model S drivers the option to hear radio stations from around the world by easily navigating the service through the car’s 17” touchscreen,” said Craig Carlson, Tesla’s vice president of software and electrical integration. “With seemingly endless music, sports and news options, TuneIn is the ultimate companion for our drivers, wherever their driving adventures take them.”

Audio broadcasts from 230 countries and territories

The ability to easily identify who is currently playing, simply by looking at the touchscreen or instrument cluster

Access to the nation’s top broadcasters, including ESPN Radio and CBS Radio

“Tesla is a true innovator and Model S showcases a beautiful way to enhance what is already an amazing driving experience through seemingly endless listening options on TuneIn,” said John Donham, CEO, TuneIn. “We strive to bring the TuneIn service to as many places as possible so our listeners can enjoy their favorite songs, teams and personalities whenever they want. We are honored to be part of Tesla’s vision and are thrilled to hit this milestone of our 200th platform.”