Ford announced back in 2012 that the new C-MAX Energi Plug-in Hybrid (PHEV) is expected to travel up to 550 miles on a single tank of gas, exceeding the range of both the Volt (379 mi) and the Prius PHEV (540 mi). Plus, they guaranteed that in electric-only mode, the C-MAX Energi offers nearly twice the range of the Prius plug-in. So while I was skeptical about the car’s purported fuel efficiency, it was exciting to kick the tires and hopefully be proven wrong. 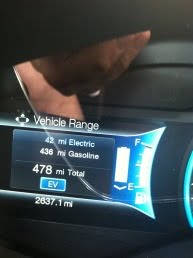 Basically as I wrote in 2012, in terms of distance, drivers of the C-MAX Energi could travel round-trip from Los Angeles to Las Vegas or from Detroit to New York City on a single tank.

The new Ford C-MAX Energi was only expected to achieve more than 20 miles of electric-only range. It has varying charging times but the one thing I noticed on the battery is that I think Ford doesn’t know how to refresh batteries. I was able to get 42 mile charge on the car at night while the car was on and with the air conditioner blowing. 42 miles!!

Now a normal quick day charge you can expect a 28-30 mile range; however you have to drain the all electric battery down to the hybrid only mode.

Then charge with both the 110V and 220V charger. To make a 220V charger, I first ran a cable from my clothes dryer outlet to the car with the help of EAA Board Member Carl Vogel and also author of the book Build Your Own Electric Motorcycle.

We used a clipper creek charger that Carl was provided by the charger company.

Here is what else impressed me about the car. The engine was not using all it’s gusto to go up hills. That is not the case with other popular hybrids. Basically, the C-MAX Energi packs a punch!

More about the C-MAX Energi that Rocks the Hizzow

Ford likes to think of C-MAX Energi plug-in hybrid electric car as a “hybrid plus.” It delivers what is unfortunately the truth which is that to transition to an all electrified transport, we need to slowly move in that direction. So the combo-pack car is what we get at this point in time as the vogue car from the car companies as the greenest they’ll go. Ok. Yes they have the Ford Focus Electric Car but why not C-MAX OR FUSION ELECTRIC. Then their plugin sales will soar. Well who am I, right?? LOL

Anyway I digress. Getting back on track, this plugin hybrid electric car provides the combo pack best of both world’s for our economy. The C-MAX is a fun ride because your so high up on the seat. As high as a Mercedes SUV.

SO the plugin hybrid electric car combines an advanced state-of-the-art battery and electric motor with a gasoline engine. I wrote about this is my book Build Your own Plugin Hybrid Electric Car. It talks about how the car is built. Now the book will show all the technical details and of how it’s made for you the customer. The technology programming might change but the story always will remain the same for the technology.

The gasoline engine does not run all the time, so you may go farther between refueling stops
1. The C-MAX Energi boasts an EPA-estimated rating of 100 combined MPGe. We got more than 100 combined. We got an average of 105 to 110. That’s really the best combined MPGe besides the Ford Fusion Energi.
2. Plug-in capability allows you to charge the battery, using either a standard 120-volt or a 240-volt outlet upgraded with available electric vehicle supply equipment
3. Next-generation SmartGauge®with EcoGuide provides images representing driving efficiency
4. Standard SYNC® with MyFord Touch® provides hands-free communications, entertainment and more**
5. EV mode button allows the driver to easily switch between all-electric power, all gas power or a combination of both
*EPA-estimated rating of 108 city/92 hwy/100 combined MPGe. MPGe is the EPA equivalent measure of gasoline fuel efficiency for electric mode operation.
**Driving while distracted can result in loss of vehicle control. Only use SYNC/MyFord Touch/other devices, even with voice commands, when it is safe to do so. Some features may be locked out when the vehicle is in gear. Not all features are compatible with all phones.