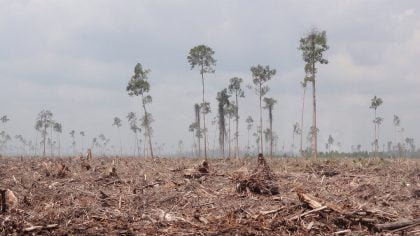 By declaring its intention to restore and support conservation of one million hectares of natural forest and other ecosystems in Sumatra and Kalimantan, APP has substantially strengthened the Forest Conservation Policy it announced in February 2013.

The initiative will require collaboration with other land managers, communities, government agencies andNGOs in the landscapes listed by APP in its announcement. Much analysis, innovation and consultation with many parties will be required to translate APP’s promise into effective restoration and conservation measures.

WWF will continue discussions with APP and other stakeholders to offer input on potential implementation approaches, priorities and development of a time-bound action plan for achieving real conservation impacts.

“WWF and other NGOs have identified the lack of attention to APP’s deforestation legacy as a major shortcoming in the original Forest Conservation Policy,” said Rod Taylor, Director of WWF’s Global Forest Programme.

“We are encouraged by this announcement and look forward to working with APP and other stakeholders to figure out the details of where and how forests will be restored and conserved under this initiative.”

APP’s new conservation and restoration commitment represents an area roughly equivalent to the total area of pulp plantations APP currently manages. Sumatra NGO coalition Eyes on the Forest, of which WWF-Indonesia is a member, estimates that APP and its wood suppliers have cleared more than two million hectares of tropical forest since beginning operations 30 years ago.

“Abandoning deforestation after the damage is done cannot be all that it takes to be considered a responsible player.” said Aditya Bayunanda Forest Commodities Market Transformation Program Leader of WWF-Indonesia.

“APP’s commitment to undertake conservation and restoration at landscape scale is encouraging, though decisions on how this is done will need to involve local authorities, communities and other stakeholders”

“We also strongly believe that areas counting towards the one million hectare target should be additional to those that pulp concession holders are legally obliged to protect under Indonesian regulations”.

APP recently agreed to an independent evaluation by Rainforest Alliance of its performance against its Forest Conservation Policy, as requested by WWF and other NGOs to provide a credible tool for buyers to assess whether the company has turned over a new leaf.

Bayunanda said: “WWF continues to advise businesses to ensure that APP is implementing the full suite of its commitments before making buying decisions.”

“APP’s new restoration and conservation commitments will need to be firmed up through stakeholder input on implementation and clearly defined indicators of success.”

WWF is acting to further a framework agreed by international and Indonesian NGOs under the umbrella of the North American and European Environmental Paper Networks. NGO’s give Asian pulp and paper giant performance test on promises.