Shark Angels, a U.S. based non-profit, is thrilled to launch their Shark Week auction on August 7th via global charity auction site, Charitybuzz, (charitybuzz.com/sharkangels) one of the world’s leading auction platforms. Items are up for bid until August 20th, including unbelievable dive expeditions around the globe, shark artwork, sporting event tickets, and, of course, some of our favorite shark themed items.

By bidding on these amazing auction items, you’ll fuel critical campaigns like our FinFree and Shark Cherubs programs that play a vital role in protecting not just a threatened species, but also our world’s oceans. Shark Angels employs grassroots outreach, creative media, and education campaigns aimed at inspiring a global movement to save sharks – and the ecosystems they keep healthy. And it’s working! For over five years, Shark Angels has been involved in some of the most well-known and highest impact ocean conservation programs around the world.

We have chosen one of the most infamous weeks of the year, Shark Week to hold our auction. Last year 3.2 million people tuned in to Shark Week across the country. Sharks are so important they deserve a week focused on them! Threats against sharks, such as, finning and overfishing are causing shark populations to diminish at an unsustainable rate. Media heavily influences the minds of individuals around the world and has instilled in them a fear of sharks. Shark Angels dispels the myth that sharks are man eating monsters through education and advocacy campaigns. Shark Week was created to raise awareness and respect for sharks and that is what we work to do everyday.

“We’ve been thrilled with the support from our partners and are very excited about this experiential auction,” says executive director, Julie Andersen. “Like the angels – and the animals they protect – it is truly unique.” Ms. Andersen hopes the auction will earn enough to fuel Shark Angels’ innovative education and advocacy programs to protect sharks, the ocean’s apex species. “The health of the world’s oceans depends on healthy shark populations, and every creature on earth depends on healthy oceans for survival. This is a tangible way to ensure your donations make a very real difference.”

You can help by checking out the items, bidding, spreading the link far and wide. Sharks, healthy oceans, and a committed organization dedicated to their preservation are depending on it. “We’ve done a lot with a little. But now we need your help.” –Julie Andersen

Charitybuzz raises funds for nonprofits around the globe through online auctions with the world’s most recognizable celebrities and brands. Featuring access to acclaimed actors and musicians, business and political leaders, sports stars, luxury travel, couture fashion, rare memorabilia and more, Charitybuzz brings its online community of bidders exclusive opportunities to live their dreams and make a difference. 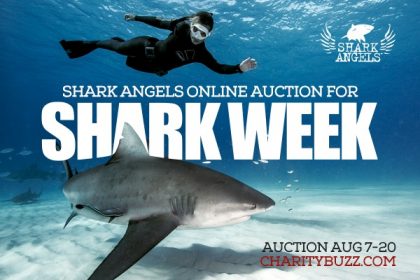