With the 2014-2015 Fusion, Ford is the first automaker to use fabrics made of recycled materials in vehicles sold around the world

DEARBORN, Mich., May 28, 2013 – Ford Fusion is the first global vehicle program from any automaker to use seat fabric made from recycled material, with the potential to recycle enough plastic bottles and post-industrial waste to make 1.5 million yards of fabric annually. That’s equivalent to between 800,000 and 900,000 yards in North America when Fusion is in full production.

Fusion is the latest example of the Ford commitment to use recycled material whenever possible. In North America, for instance, Ford has increased use of recycled yarns from zero in 2007 to nearly 66 percent of vehicle programs for 2013.

Overall, Ford uses 41 fabrics across 15 vehicle lines globally – from Mustang and Fiesta to F-150 and Taurus.

The global launch of the all-new Fusion (known as Mondeo in Europe and Asia Pacific) shows the goal is attainable and that Ford is all-in on an eco-conscious way of doing business.

Since the 2009 model year, any new seat fabric used in Ford vehicles must contain at least 25 percent recycled material.

As new ideas and technologies emerge, processes evolve and volumes increase with other automakers following Ford’s lead, the costs of developing sustainable fabrics will likely drop, Kordich says. When that happens, Ford will likely consider requiring an even higher percentage of recycled material content in its fabric, Kordich says.

Some of Ford’s most advanced vehicles – Focus Electric, Fusion Hybrid SE – already have fabrics with as much as 100 percent recycled content as Ford extends the eco-conscious aspects of such vehicles beyond their powertrains.

“Ford is definitely a leader and the only one in the automotive market to put a marker out there that we need to hit,” says Dan Russian, business manager at Sage Automotive Interiors, Ford’s largest fabric supplier in North America. “It was exciting to see Ford take a leadership position in the use of sustainable materials, which supported the efforts of our design and development teams.”

Russian says the Ford-driven changes had a hand in speeding up the supplier’s development plans to increase offerings containing recycled content – potentially making more fabrics derived from recycled material available to the entire automotive industry up to five years earlier than originally planned.

Serious about sustainability
The 2008 Escape Hybrid was the first model to feature an entire seat made of fabric containing recycled yarn. High costs prevented aggressive development of recycled fabrics, according to Kordich, who joined Ford in 2000 and has a background in interior architectural design.

“Initially suppliers didn’t think we were serious when we told them in the late 2000s that our new corporate strategy required a minimum of 25 percent recycled content,” says Kordich. “But more and more suppliers started to increase their environmental R&D efforts.”

Kordich says that first application of fabric in the Escape Hybrid showed that using recycled material in automotive fabrics was possible. At the same time, suppliers were challenged to develop new fabrics that used recycled content while still being able to meet Ford’s stringent quality tests and not passing along any increased cost to customers.

But with Focus Electric and the global Fusion program in the design phase in the mid-2000s, Kordich wanted to expand Ford’s leadership in sustainable fabric development. She began working with suppliers to develop fabrics that went beyond using recycled yarns to encompass more sustainable manufacturing processes.

One of the companies, North Carolina-based Unifi, which had developed a yarn branded REPREVE®made from post-industrial and post-consumer waste, such as clear, plastic water bottles. Prior to working with Ford, REPREVE had been primarily used in the apparel and contract market segments.

“From my previous background I knew companies like Unifi and Sage were innovating products to further push the envelope in sustainable developments,” says Kordich. “Collaborating with companies that have the same mindset as Ford helped take us to the next level much faster.”

Still, high costs remained an issue. Kordich worked with Unifi and Sage on a plan: Unifi would provide REPREVE to Sage, which would use the yarn to make seat fabric and sell any waste (trimmings, bad dye lots, etc.) back to Unifi for reprocessing. Ford would also help collect clear, plastic water bottles and send them back to the REPREVE Recycling Center. Ford is in the midst of a campaign to help collect and send 2 million plastic bottles to Unifi. Each Fusion contains the equivalent of up to about 40 clear, plastic bottles.

Kordich’s solution closed the waste loop, kept costs neutral, and gave Ford a competitive advantage by offering a product that supported its commitment to quality – and the environment. REPREVE debuted on the 2011 Focus Electric.

Fusion leads the way
Ford uses a total of 41 fabrics from a handful of various suppliers across 15 vehicle programs that vary by pattern, level of recycled content and purpose.

The amount of recycled material in each vehicle varies depending on region. In North America, 100 percent of the seat fabric in Fusion Hybrid contains recycled material. Where available, Mondeo in Ford’s Asia Pacific and European regions has 43 percent recycled content.

“We are off to a good start,” Kordich says.” But it’s only the beginning of our corporate vision.” 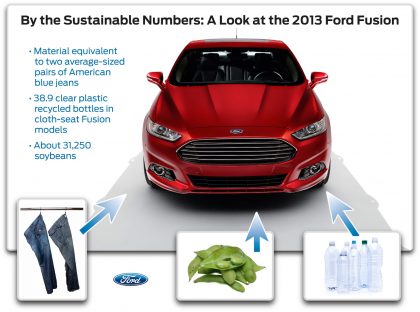