SYRACUSE, NY, JANUARY 21, 2015 – It’s not the first time the University of Phoenix Stadium will host the “Big Game” and the two teams will not be there for the first time. But for the first-time ever, the big game will be illuminated by high performance LED stadium lights from Ephesus Lighting, Inc., the leader in providing LED lighting solutions for sports facilities.

Earlier this season, University of Phoenix Stadium became the first NFL venue to light its playing surface with LED lighting. The lights have been a hit with fans, players, broadcasters and facility operators.

“This year LED sports lighting has proved to be ready for primetime as we illuminated more than 1,000 sporting events with our Ephesus LED stadium and arena lights,” said Mike Lorenz, President of Ephesus Lighting. “It’s fitting that the biggest sporting event in the world will be lit by our LED lights, the future of sports lighting.”

Ephesus fixtures, which are Powered by Cree® LEDs, provide a significant increase in illumination compared to the traditional metal halide lights that were previously installed at University of Phoenix Stadium. LED lighting also provides brighter and more uniform light which eliminates shadows on the playing surface, creating a better stage for players and fans, both in the stadium and watching on high-definition television.

The Ephesus installation is well-suited to HDTV broadcasting and feedback from broadcasters this season has been very positive. Not only is the light brighter and more uniform across the playing surface, but the new lighting ensures that colors are reproduced more accurately. Since broadcasters do not need to open the camera’s aperture as wide to let in more light, they can present a clearer picture, show greater field depth, zoom in closer and even offer more detailed slow motion replays.

“The capabilities of LED technology have changed the way we view sports lighting,” said Joe Casper, Founder and CTO of Ephesus Lighting. “There is no doubt in our minds that both the fans in the stadium and millions more watching on television will see the game in a whole new light thanks to our ground-breaking system.”

University of Phoenix Stadium installed 312 Ephesus Stadium fixtures to replace the 780 metal halide fixtures. The new system uses just 310,000 watts of energy as compared to the 1.24 million watts needed to power the previous system for a 75% reduction in overall sports lighting energy consumption.

Additionally, LED lights can be turned on and off with the flick of a switch, whereas metal halide fixtures require a 20-minute warm-up period. This on/off feature allows facility operators to create light shows for fan entertainment, and, if a power outage were to cause a blackout, like it did in 2013, the LED lights can be turned back on immediately with the flick of a switch.

“As the host venue for the 2015 Super Bowl, we are excited about demonstrating the benefits of LED technology to a global audience,” said Peter Sullivan, General Manager and Regional Vice President for Global Spectrum at University of Phoenix Stadium. “The Ephesus Lighting LED solution has improved lighting for the athletes, fans and broadcasters, all while reducing energy consumption and eliminating conventional sports lighting maintenance expense.” 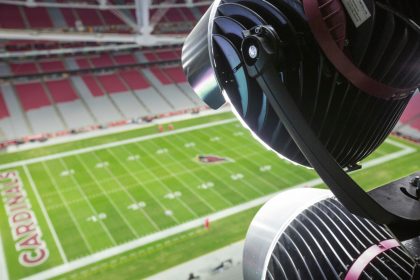 The University of Phoenix Stadium, with its retractable roof and field, is unlike any other stadium in North America, and a marvel of design, engineering, and technology. This multi-purpose facility, which opened on August 1, 2006, previously hosted Super Bowl XLII in 2008, two BCS National Championship Games (2007 & 2011), the annual Fiesta Bowl, and numerous international soccer matches. The 63,400-seat stadium, which is expandable to seat 72,200 fans, is owned by the Arizona Sports and Tourism Authority (AZSTA) and operated by Global Spectrum.

Since lighting the first sports venue with LED technology in North America in 2012, Ephesus Lighting luminaires have been operational for over 300,000 hours in more than 100 indoor and outdoor sports and entertainment venues across North America.