(Seattle—Jan. 26, 2015) The U.S. Environmental Protection Agency office in Seattle is extending a big congratulations to the Seattle Mariners baseball team for winning the “Setting an Example Award” at the Sustainability Leadership Awards hosted by Sustainable Seattle on Jan. 23. The EPA Green Sports Week of Action, from Jan. 26-30, highlights sustainability work of sports teams, facilities and outdoor organizations across the nation. Fans can follow their teams’ green activities by looking for #greensports on social media this week.

“The Mariners reflect the green values of their city and fans as they set a national example for sustainable games,” said Dennis McLerran, EPA Regional Administrator for the Northwest Region. “The sustainability practices the Mariners use at Safeco Field on a large scale—recycling, composting, installing efficient lights—are simple and impactful things fans can do at home. It’s important we all do our part because so many cherished Northwest sports and outdoor activities depend on a healthy environment.”

The Mariners received the award for their leadership in sustainable ballpark operations since 2006. The team recently became the first team in Major League Baseball to install energy-saving LED lighting in their ballpark to replace less efficient metal halide fixtures. The new LED lights are expected to reduce energy consumption by 60 to 70 percent and last 30 times longer than the old lights. In addition, the Mariners recycle or compost over 90 percent of all waste generated at Safeco Field. In 2013, the Mariners diverted over three million pounds of waste from landfills and saved $114,000 in waste disposal costs.

The Green Sports Alliance counts many teams in the region as founding members who began the push for green sports. 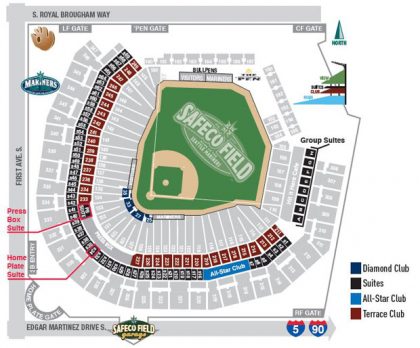 The Seahawks divert 94% of waste generated at games from landfills, sending most of the waste for recycling and composting. In addition, millions of gallons of used cooking oil from CenturyLink Field goes to produce biodiesel.

The Portland Trailblazers use drought-resistant plants outside the Moda Center to reduce landscaping water needs by 20 to 30 percent.
The Portland Timbers use green cleaning products at Providence Park.
The Seattle Thunderbirds play at the ShoWare Center, the first sports and entertainment facility in North America to be designed to LEED GOLD Certification standards, which results in less impact on the environment and a healthier space for workers and fans.

Fans outside of Seattle can check the Utility Rebate Program for your state or call your local utility: http://www.dsireusa.org/

For more information on green sports and to learn what teams are engaged, visit the EPA Green Sports page http://www2.epa.gov/green-sports