The original ponycar is all-new just in time for its 50th anniversary. Now destined for global markets, the 2015 Ford Mustang sports new styling that harks back to its heyday while still looking to the future. The Mustang’s new interior is more upscale, with soft-touch materials and sporty design traits.

A fast array of engines sits under the hood of the 2015 Ford Mustang. The base engine is a carryover 3.7-liter V-6 producing 305 hp and 280 lb-ft of torque. Next up the ladder is an EcoBoost (turbo).  That’s the one I test drove.

There’s a reason the 2015 Ford Mustang was crowned by US News and World Report:

The 2015 Ford Mustang ranking is based on its score within the 2015 Affordable Sports Cars category. Currently the Ford Mustang has a score of 8.7 out of 10 which is based on our evaluation of 26 pieces of research and data elements using various sources. 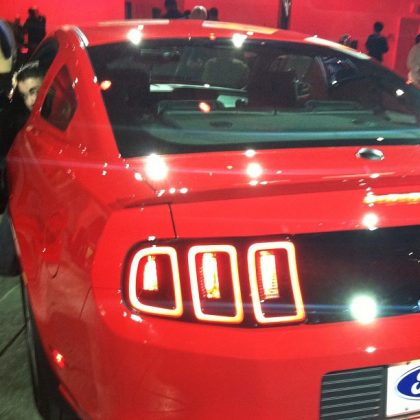 Back in 2012, I was peeping the Ford Mustang that now has LED Lights.

MotorTrend summed it up best when they said:

The 2015 Ford Mustang is all-new this year. Expected to be announced later is a 50th Anniversary Edition model, as well as the successor to the 661-hp Shelby GT500. Rumored to be called the GT 350, the Shelby follow-up will be designed to take down heavyweights such as the BMW M4, Mercedes-Benz C63 AMG, and, of course, the Chevrolet Camaro Z/28.