RE-volv, a San Francisco-based nonprofit, successfully completed its third crowdfunding campaign, raising over $50,000 to finance a 36kW solar array for the Other Avenues Food Cooperative in San Francisco.

“People are sick of waiting for leaders to take action on climate change. They want to lead the way in their own communities and RE-volv is giving them a tool to do that.” said Andreas Karelas, Executive Director of RE-volv. “Having completed three successful campaigns, we see that this model is replicable and poised to grow rapidly.” 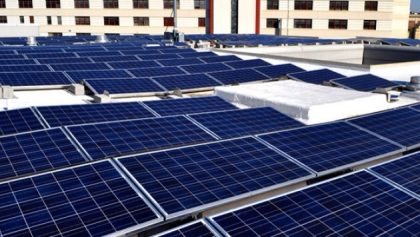 ﻿During its first three Indiegogo crowdfunding campaigns, RE-volv has raised over $121,000 from close to 900 donations from people in 38 states and 22 countries. This money is being utilized to finance three community-based solar projects amounting to 68kW of solar capacity. RE-volv finances solar energy projects for nonprofits and cooperatives that serve their community. RE-volv covers the initial costs of a 20-year solar lease by crowdfunding tax deductible donations. As communities pay RE-volv back through a lease over time, RE-volv reinvests those funds plus interest into new projects for nonprofits and cooperatives creating a revolving fund for solar energy that serves the community.

“I’ve been working on this project for eight years, and it’s been difficult to find the right fit for financing this solar project,” said Other Avenues president Darryl Dea. “So when RE-volv came around it was a perfect fit for us because not only do they work with nonprofits and co-ops, but we’re able to contribute to this fund which will further create more solar projects.”

Leading up to Global Divestment Day last week, Bill McKibben, author and founder of 350.org, wrote: “As everyone’s divesting, might be worth donating a little money to this Solar Seed Fund” which resulted in increased donations for the campaign.

Another factor that helped RE-volv reach its crowdfunding goal was being selected as a winner of the OpenIDEO Renewable Energy Challenge two weeks ago. As a result, RE-volv will receive resources and support from innovative design firm IDEO and leading environmental foundation, the 11th Hour Project.