Ardagh Group, Glass – North America, a division of Ardagh Group and a leading producer of glass containers for the food and beverage industries in the United States, today announced its support of the GameDay Recycling Challenge to promote waste reduction during football games at colleges and universities.

The GameDay Recycling Challenge is a national program administered by a partnership of the College and University Recycling Coalition (CURC), RecycleMania, Keep America Beautiful (KAB) and the Environmental Protection Agency’s WasteWise program.

During the challenge, colleges and universities select a home football game to promote waste reduction and recycling. During that game, all waste, recycling and compost, plus game attendance, are reported in order to rank the winning schools in five waste reduction categories: Recycling, Waste Minimization, Diversion, Greenhouse Gas Reduction and Organics Reduction. 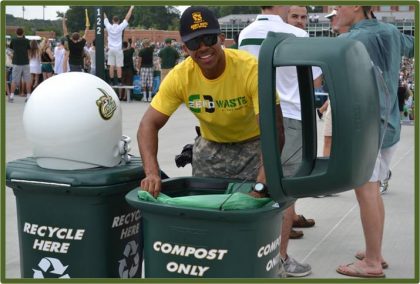 The Clemson Tigers beat out colleges across the nation to win the 2014 GameDay Recycling Challenge by collecting over 60,000 pounds of recyclables and food organics during a single home game. In total, nearly 2.2 million pounds of waste was diverted, with the equivalent of more than 3,300 metric tons of carbon dioxide prevented from being released.

As a manufacturer of 100 percent endlessly recyclable glass containers, Ardagh Group is an advocate for sustainability and places protecting the environment at the forefront of its business. In 2014, Ardagh Group’s use of recycled containers laid end-to-end would circle the Earth more than 16 times, or enough to reach the moon and return halfway.

With a history in the U.S. that dates back more than 125 years, Ardagh Group, Glass – North America is a leading glass container manufacturer, designing, developing and producing endlessly recyclable glass bottles and jars for the wine, beer, beverage, spirits and food container markets. The North American glass division has more than 5,000 employees that manufacture approximately 10 billion glass bottles and jars each year at its 15 manufacturing facilities.