ANNANDALE-ON-HUDSON, N.Y.— U.S. Secretary of State John Kerry began his Central Asian trip with a visit Saturday, October 31. That’s to the University of Central Asia (AUCA) in Bishkek, Kyrgyzstan. All to take part in the dedication of the University’s new green campus. One which is being constructed in partnership with Bard College. AUCA is the region’s only university offering U.S.- and Kyrgyz-accredited degrees in liberal arts. All through its partnership with Bard. Kerry praised the university as a “flagship institution that is transforming educational opportunities for students and for teachers all across the region.” 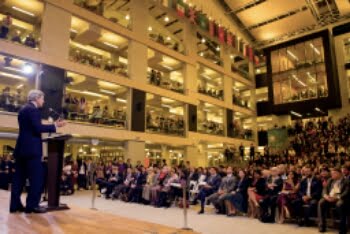 “AUCA is not just a model—it is a magnet for the most talented students from Bishkek to Kabul,” said Kerry.

“This university, the American University of Central Asia, is the gold standard for teaching you students to think critically… This is not a place for the indifferent or for the cynical. This is a place for daring to be the absolute best that you can possibly be.” He added, “This new campus is special because it’s the first private construction project in Central Asia that is clean green all the way—that means geothermal heating and cooling, state-of-the art sewage, irrigation systems, and the highest standard of energy efficiency in the entire region.” 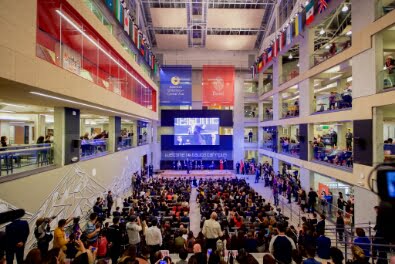 Speaking at the dedication, Jonathan Becker, Bard’s vice president for academic affairs and a member of AUCA’s Board of Trustees, stated, “This new campus in many ways is the embodiment of AUCA.

New York–based architect Henry Myerberg has designed a facility that creatively weaves together teaching and communal spaces to facilitate the open exchange of ideas and promote student-centered learning. AUCA is the leading liberal arts and sciences institution in the region, and it now has a facility that meets its academic aspirations.”

As part of construction of the new campus, Bard has received a $850,000 grant from the U.S. Agency for International Development (USAID). That’s Bureau for Democracy, Conflict, and Humanitarian Assistance. This goes to Office of American Schools and Hospitals Abroad. All for the construction of AUCA’s first residence building.

The partnership with AUCA reaffirms Bard’s historical commitment to the development of educational communities. Especially where diversity is an essential and valued component. One that enriches intellectual engagement. AUCA plans to build three residences that will eventually accommodate 72 students and 18 faculty. All in halls that flank the campus’s academic facilities. Moreover and on the new green campus.

Most importantly, the goal is to attract and accommodate. For that’s regional and international students and faculty. All the while advancing the spirit of community living and learning.

AUCA’s new campus demonstrates its commitment to academic excellence. Also freedom of thought, and the promotion of diverse cultures and ideas. In this vibrant atmosphere, where the freedom to study is considered a privilege, AUCA is designing new paths for social transformation and international understanding. The Bard-AUCA partnership is one of many ambitious initiatives administered by Bard.

They represent institutional idealism. Also ambition and a commitment to substantive global engagement. 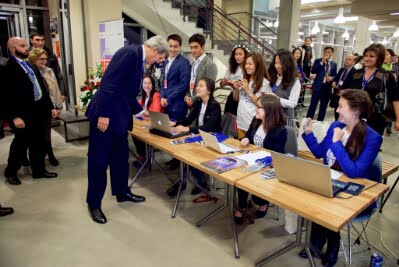 USAID is the lead U.S. government agency that works to end extreme global poverty. In addition and enable resilient, democratic societies to realize their potential. Its grants are made possible by the generous support of the American people. For more information, visit www.usaid.gov.

In addition and founded in 1993, AUCA develops future leaders for the democratic transformation of Central Asia. American University of Central Asia is an international, multidisciplinary learning community. All in the American liberal arts tradition. Its curriculum includes the Preparatory Program (New Generation Academy). Also 14 undergraduate majors, and four graduate programs.

In addition to its top-flight academic programs, AUCA is committed to freedom of expression, critical inquiry, and academic honesty. AUCA is the first university in Central Asia to offer U.S.-accredited degrees in liberal arts programs through a partnership with Bard College. Finally and In addition to Bard, AUCA maintains partnerships. Especially with a number of universities and organizations worldwide.