Who doesn’t love a Tesla Model S 2014? I mean!! If words could really describe the intensity of the the performance, speed and efficiency of the 2014 Tesla Model S P85 (for performance based 85 kilowatt hours), then they would be listed. Yet this all electric car is beyond words. Of all cars. That’s why the Tesla Model S P85 is not just simplicity, luxury and overall performance. 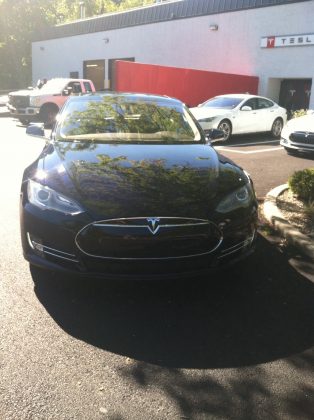 Range and Performance
Many times the Tesla was tested for speed and acceleration plus range with efficiency. Tests were performed at 0-60, which was 4 seconds during one test; not 4.2. Given the Model S performance battery pack and controller programming makes this an extremely efficient car.

Therefore, if after testing the car at 0-60 many times! Yet clearly one then drives efficiently this car, expect immediately generating a range of 328 miles (total real world range).

Tesla favors running changes throughout the year rather than annual updates so major changes may depend on the timing of your purchase. Most recently, the company released an all-wheel-drive, dual-motor model called the “D.” Available on Model S’s with the 85kW battery and known as the P85D, these trim levels add all-wheel drive along with several safety enhancements including a 360-degree sonar system and collision avoidance braking.

As one of the most desirable electric cars available today, the 2014 Tesla Model S is also one of the best luxury sedans, too.

“Sleek,” “desirable,” “luxurious,” “powerful” and “inspiring”. For these are all words that one typically uses to describe the latest European luxury sedan.

But in this case, they also describe America’s latest and best homegrown electric vehicle. For that’s the 2014 Tesla Model S.

With its luxury sedan accommodations, pulse-quickening performance. I mean world-class handling and unmatched range. For the Model S is a huge departure from the typical electric car. Yet thanks to a thoroughly modern interpretation of interior design and a host of advanced technological features (including an all-wheel-drive model and a rapidly expanding Supercharger network). Also the Model S also serves as a new benchmark for all vehicles, electric or otherwise.

Despite these many virtues, the Tesla Model S is not exclusive to the ultra-wealthy. Pricing for the base model starts around $70,000 when new, and that’s not including a federal tax credit. While this isn’t exactly chump change, the base model’s EPA-estimated range of 208 miles is more than double that of any other electric vehicle. To get the most out of your Model S ownership, though, we’d recommend the bigger (and more expensive) 85 kWh battery pack, which provides greater performance and an as much as 265 miles of range.

Considering the Model S is a new type of car coming from a new, relatively tiny automaker that has just one previous car under its belt (the Roadster), perhaps it doesn’t come as a surprise that there are some inevitable bugs to work out. You can read about our year-long experience with our own Model S with the 85 kWh battery and third-row seating option. Reliability was subpar at least in comparison to other, more established cars, but we’ve been impressed with the Model S’s overall versatility and Tesla’s prompt warranty service repairs.