The Tesla Motors Model 3 was the next logical step of their “secret master plan” and mission to accelerate the world’s transition to sustainable energy.

Bottom line folks is a car for $35,000 but after tax credits in State and Federal (yes money back folks) it’s $22,000 for the newest Electric car on the market.

The shockwaves were even brought to Detroit. The Chevy Bolt is now $20,000 for their all Electric 200 mile car. 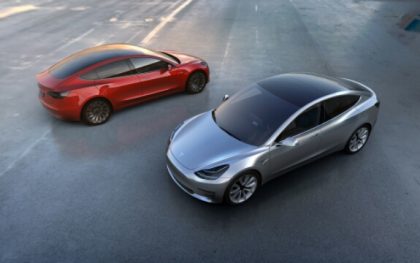 The Model 3 comfortably fits 5 adults and all of their gear. Plus an all Electric car is performance by default so zero to 60 mph in less than six seconds in all-wheel drive!

This, combined with over 200 miles of range while starting at $35,000 before tax incentives / credits, makes Model 3 an extraordinary mid-size sedan.
[vimeo 161138986 w=500 h=281]
Model 3 will begin production in late 2017, ramping Tesla vehicle production to 500,000 vehicles per year.  However, after 48 hours from launch Tesla has pre orders of more than 230,000. This has led Elon Musk to announce Tesla is re-evaluating their production plans.

My guess: It’s About to get Real Up in Here!