The U.S. Energy Information Administration’s (www.eia.gov) new “Today in Energy” brief looks at how much (and where) electricity is generated by waste-to-energy plants.

“At the end of 2015, the United States had 71 waste-to-energy (WTE) plants that generated electricity in 20 U.S. states, with a total generating capacity of 2.3 gigawatts. Florida contains more than one-fifth of the nation’s WTE electricity generation capacity, and in 2015, Florida’s Palm Beach Renewable Energy Facility Number 2 became the first new WTE plant to come online since 1995 and the largest single WTE electricity generator in the United States.”—EIA 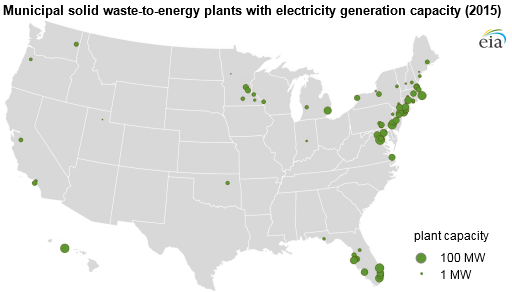 The “Today in Energy” brief was posted Friday on EIA’s website at: http://www.eia.gov/todayinenergy/detail.cfm?id=25732.