The concert was the first of Electricity’s new campaign, Silent Bus Sessions, who want to pay attention to how electric buses may contribute to a quieter and more pleasant urban environment. Elbussarnas noise level is so low that it is possible to perform acoustic concerts and recordings board.The next video with the new artist will already on Thursday. 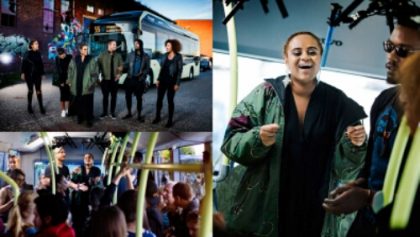 At the initiative of Volvo, the City of Gothenburg and others, Seinabo Sey – one of Sweden’’s most popular artists – recently performed onboard one Gothenburg’s new electric buses. Two music videos are being released today. They were recorded during a surprise concert for unsuspecting passengers. The purpose of the campaign is to promote ElectriCity, a unique collaboration that resulted in the new electric bus route. 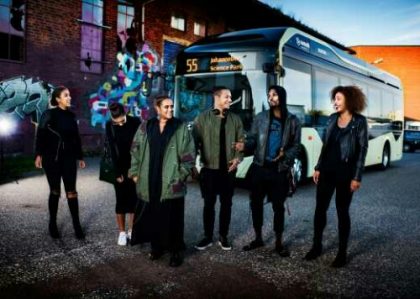 Few of the passengers travelling the route on 7 September, 2015  suspected what was in store when they boarded the bus and stepped right into a video recording of the Silent Bus Sessions.

The videos from Seinabo Sey’s bus concert will be released today. The songs are unique versions of her hits “Younger” and “Hard Time”, and were performed a cappella with a backing choir.

“I’ve wanted an opportunity to sing with my friends from the Tensta Gospel Choir for so long, and it was fantastic that it finally happened. It was a special day. The passengers had no idea what was going to happen, and I was a bit nervous about how they would react,” Seinabo says.

The Silent Bus Sessions campaign continues on Thursday with the release of music videos from a new artist.

The Silent Bus Sessions was produced to demonstrate how silent the new electric buses are – the noise level is so low that acoustic concerts and video recordings can take place onboard.

The unique collaboration that resulted in the new electric bus route is called ElectriCity and includes representatives from industry, academia and municipal and regional administrations.

“Rising noise levels represent a serious health problem in big cities around the world. That’s why we’re convinced that electric public transport in cities is the way forward. But a real difference can only be achieved if there is collaboration between vehicle manufacturers, urban planners, public transport, energy companies and academia. This collaboration is the unique strength of the ElectriCity project,” says Niklas Gustafsson, Chief Sustainability Officer, Volvo Group.

The City of Gothenburg is another partner in the project.

“This shows how creative forces meet in Gothenburg. Silent electric buses eliminate noise and exhaust gases and allow people to enjoy music and creativity on their way to work or school. Music, culture and technical development are among Gothenburg’s strengths, and it’s wonderful to see what happens when they’re combined together,” comments Anneli Hulthén, Chairman of the Municipal Executive Board, Gothenburg.