Every time I sit down to write about the energy industry these days, I simply can’t help myself.  Each time, I want to start the article by slapping myself on the forehead and exclaiming: “Who’d a thunk it?” The changes in the energy field are coming so fast and furious that pipe dreams from just a decade ago are becoming a reality right before our very eyes.

Think about it like this. If you install a solar panel on your roof and put grid tie inverters to work, you have done what generations of Americans never dreamed possible: Contributed to the national energy pool.

I typed in “growth in wind power” in a Google search and the first two words I read were these “wind industry.” Those two words were never linked together before. Now there is a “sun industry” and a “wind industry.” There is also a growing “tide industry,” from generators that harness the movement of the ocean. There is a “geo-thermal industry” that centers around harnessing underground heat and underground cooling. These were dreams 10 years ago. Now
they are industries.

Electric cars, of course, is the frustrating industry that seems to be in a stall. In time, this will revive itself, perhaps someday during the next White House administration. But President Obama did his best to push automakers into a new mindset and he certainly succeeded. As of 2013, cars on U.S. roads averaged a previously unheard of 23.6 miles per gallon. You see all those tiny cars out there. The land of trucks is turning into a land of tweaky, tiny cars. All to the better.

Back to the solar panel and grid tie inverters….this works two ways. You can go off-grid by disconnecting (or simply not using) any electricity provided to you from your local utility. This has obvious benefits. Your electricity usage no longer supports the burning of fossil fuels that contribute dangerously to global warming. Your electric bills drop or disappear. All to the better. 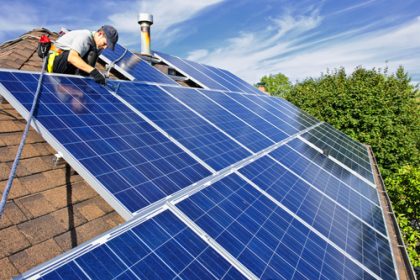 But not so fast. Two of the least understood – and almost never predicted – phenomena in the energy market is that improvements in the efficiency of appliances, motors and heating and cooling units have become one of the most important contributors to the stall in national demand growth for electricity. People are not using few electronic devices, but just the opposite.

Nevertheless, our devices – televisions, radios, refrigerators – are so much more efficient than before that utility companies are scaling back on new coal and oil-burning plants more than anyone anticipated. That’s all to the better, too.

The second phenomenon – the flip side of efficiency – is waste. Let’s imagine that half the people in the country went off-grid. They simply produced their own electricity. Well, they are either going to produce too much or too little electricity and the obvious option is to produce too much because too little means sacrificing quality of life. So, off grid consumers will produce too much and allow the excess to go unclaimed. Once their private batteries are full, their solar panels will be idle. The sun will shine and energy harvesting will stop.

This is inherently a wasted opportunity. Users who stay connected to the grid will benefit themselves. Thereby selling their excess to the utility company, and they will benefit mankind and the planet, but lowering the need to produce electricity with fossil fuels.

Just taking your home off line or off grid seems sensible, but it under-utilizes the impact an individual could have on the planet.