In recent years, renewable energy has become more affordable. For this reason, most researchers have started looking for alternative sources to reduce the escalating costs of energy. The emergence of new sources of renewable energy is expected to result in a less polluted environment. Below are 5 renewable energy sources poised to make a difference.

Geothermal power plants, unlike other energy sources, do not burn fuel. This significantly reduces the levels of pollutants emitted to the environment. Geothermal is drawn from the earth and can be used in many ways from large power stations to simple pumping systems. So far, various parts of the world are already tapping this energy. It is viewed as an affordable solution to reducing the dependence of fossil fuels. It has also been said to be a solution for health risks and global warming. In the future, geothermal power has the potential to be highly significant towards achieving a more sustainable and a cleaner energy system. Note that it is a means that has the capacity to supply a continuous baseload power. The future may also open avenues for the direct use of geothermal energy as a heating source for businesses and homes. http://www.eia.gov/energyexplained/index.cfm/data/index.cfm?page=geothermal_environment.

More than was the case in the 2000s, solar power is now a more cost-competitive power source. It is drawn from the sun without the emission of toxic pollution or global warming emissions. Today the solar industry is bigger than that of gas and oil construction. 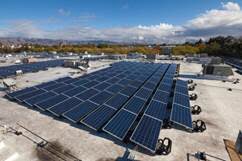 This explosive growth has, in turn, created new jobs and offered employment in the renewable energy industry. Solar energy impacts the economy positively both directly and indirectly. People who have already started depending on this alternative have experienced a reduction in their use of traditional energy sources. This is what keeps natural ecosystems intact, reduces devastating oil spills, natural gas leaks, and taxpayer-funded cleanups. As it becomes more integrated with data analytics alongside other technologies, solar will become a major element in the next revolution. http://www.ucsusa.org/clean_energy/our-energy-choices/renewable-energy/environmental-impacts-solar-power.html#.WBxCIC197IU.

Wind turbines use wind power to generate electricity. It is, in fact, one of the most sustainable ways to generate power since it does this without emitting toxic pollution to the environment. Wind is also naturally affordable meaning it is inexhaustible and readily available making it a viable alternative to fossils. The most outstanding objections to future wind power technology are concerns about the long-term effects on wildlife, habitats, and human health. Despite these challenges, wind power is rapidly growing with high rates. There is a high potential for wind facilities being located offshore where there are stronger winds and high reliability. http://telosnet.com/wind/future.html.

Biomass comes from the production of first generation biofuels derived from plant matter. These fuels rely on crops to produce energy. The global production of these fuels has in the past few years experienced a surge, with its demand being particularly strong. In the future, biofuel may be largely used in existing engines to clear harmful vehicle emissions. Since waste residue will always be easily accessible, there will always be a continuous source of renewable energy. http://biomassmagazine.com/articles/1672/biofuels-in-the-future.

This form of energy needs turbines which have to be powered by high amounts of flowing water. So far, it has seen an increased dependence around the world. However, it comes with the concern of altering the comfort of the wildlife and the ecosystem since rivers have in the past needed a dam installed in them. However, new innovations are being put into place to allow water to be released gradually to generate electricity. This method is more dependable because unlike wind and solar power, tides and waves are predictable and don’t diminish with cloud cover. http://spectrum.ieee.org/energy/renewables/future-of-hydropower.

While these may be the most pronounced renewable energy sources, there are others that may not have caught up. Body heat, for instance, may in the future be used to charge mobile devices. On a small scale, untested sources such as these could have some use in the renewable energy industries.