Biodiversity, or the occurrence of a wide range or plants and animals within any given environment, is critical for the healthy functioning of our planet. Healthy soils, climates, water systems, are all dependent upon the greater ecosystem in which they exist, which in turn depends upon the biodiversity that creates it – in essence a full circular system with many parts all interconnected and dependent upon each other.

May 22nd represented the International Day of Biodiversity, a day set aside by the United Nations Convention of Biological Diversity with a unique theme each year. More than 196 countries are Parties to this convention, committed to the conservation and sustainable use of biodiversity, as well as the fair and equitable sharing of the benefits that come from diverse natural resources.

Over the past few months we’ve seen a dramatic increase in the interest in bamboo, in everything from bamboo charcoal and soil amendments to bamboo toothbrushes to Gucci’s latest line of perfume – Gucci Bamboo. With this interest we decided to take a look at how bamboo aligns with the importance of the International Day of Biodiversity.

Bamboo is a mystical plant that is closely associated with huge ecosystems in China, along with the iconic panda, but the typical image of a bamboo forest does not make one think of ecosystems that are high in biodiversity. For example the “bamboo seas” typical of southern China seem to be endless expanses of a single species as the photo shown below. These forests are beautiful and magical and drawing in thousands of visitors each year they do seem to contribute to the 2017 theme of sustainable tourism. But a deeper look suggests that they seem to be extremely low in biodiversity, with some sources suggesting that China’s bamboo sea might actually be a single plant – a plant with an amazing ability to colonize, but with a cost to biodiversity. 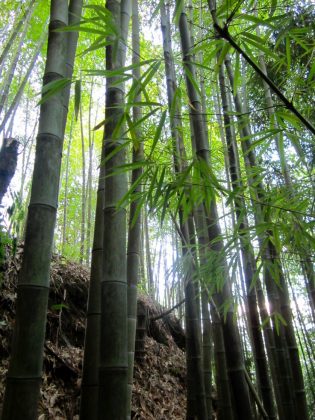 So how and where does bamboo contribute to the Convention on Biological Diversity and in particular the International Day of Biodiversity? The answer comes when we move away from the iconic image of China’s pandas munching on bamboo and look instead at some of the key areas of concern under the CBD, those areas that fall into biodiversity hotspots. In these countries, regions and ecosystems there seems to be a recent trend of native species of bamboo, such as Guadua aculeata in Nicaragua, being used to actually restore the biodiversity of an area. In this situation non spreading bamboo is used to reconnect the remaining areas of biodiversity, effectively providing a buffer zone and conserving these remaining areas. One project has received gold level certification from the Climate Community Biodiversity Alliance for its biodiversity impact, contributing to the CBD commitments.

The question is can other biodiversity survive and thrive amongst bamboo, and if so it seems to be a win win situation. The European Tropical Forest Network published a special edition paper on how and why bamboo can not only contribute o increasing biodiversity within these hotspots, but also providing increased protection of remaining biodiversity. The projects highlighted in this paper come from Central America, but also South and West Africa.

If this is true I’d say that this is a win win situation for those of us who want to live greener, but were never sure if this increase in the occurrence of bamboo products was just a fad. Therefore in celebration of this year’s International Day of Forests, let’s also celebrate bamboo.