Environmentalist and tech wiz Eric Lundgren will be breaking his own world record for an electric vehicle’s range with his homemade, battery powered car made from nearly entirely all recycled parts. He will be pitted against a Tesla and both cars will simultaneously leave LA, head to San Diego, and return to LA on a single charge (over 425 miles). We will know on Monday which car will make the entire trip, his $12,000 homemade car or the $150,000 Tesla. Eric is doing this to showcase that electronic waste is a worldwide epidemic, and that re-using components (a process he calls hybrid recycling with his fortune 500 recycling clients) has vast applications.

Who Is Eric Lundgren??

So while this is an amazing feat, we still want to know more about these people. I get it!  That’s why we have that who is section on people like this. Context! Context! 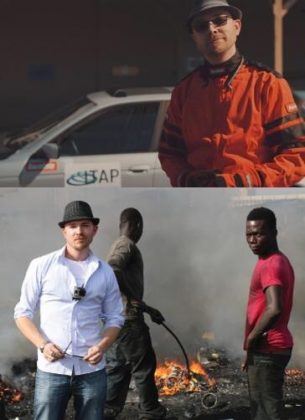 Eric Lundgren is known for innovating and leading a national movement for individuals and businesses to utilize a process he calls Hybrid Recycling.

With a client roster of Fortune 500 companies including Nintendo, Motorola, Panasonic, Dell, Best Buy and more, Eric promotes that re-use is the purest form of recycling, and to put this into action he created America’s leading hybrid recycling plant called ITAP. To demonstrate the potential of his revolutionary hybrid recycling model, Eric made headlines last month for breaking the world record for an electric vehicles range with the car he built himself out of e-Waste dubbed “The Phoenix,” a salvaged BMW that he dragged out of a junkyard and made up of 88 percent recycled materials, beating the range of a Tesla (while his car only cost a total of only $12,900.)

As I’ve written about with Staples and other pieces, Electronic Waste is the fastest growing waste stream in the United States; yet our country lacks a real solution to efficiently process this waste system. Most e-Waste is landfilled at a financial costs and to the detriment of the environment, and other e-Waste is exported to third-world countries where in-humane processing methods lead to wide-spread injury and death. After witnessing firsthand how are e-waste is polluting the earth in his global travels, Eric created a real solution for the e-Waste epidemic. Through efficiency and innovation, his company identifies all generic parts and components of value and preserve is discarded e-waste, rather than just destroy them. They then extract and re-integrate into new applications. Eric calls this “Hybrid Recycling,” and it decreases the demand for raw material production, conserving our natural resources and reducing our carbon footprint.

Eric recently pit his homemade Phoenix car against a Tesla Model S P90D, Chevrolet Bolt, and Nissan LEAF against each other on a highway range test. All cars were fully charged, and traveled the same route, under the same conditions, with professional drivers. The Phoenix smoked them all in this real world driving conditions up the California coast, the footage can be seen here: http://insideevs.com/13000-diy-electric-car-drives-340-miles-on-23rds-of-its-battery-video/.

Eric will be breaking his own record later this month where he will drive his jaw dropping car over 400 miles (from La to San Diego and back) on a single charge.

With Eric’s global footprint, robust company growth, and a specialization in mobility electronics, he has emerged as the industry leader in efficient Hybrid Recycling!!