Eco-driving is a well-established and simple concept. Truck drivers have been doing it for years to save fuel and it’s already quite popular among drivers around the world.
CarPrint is like a sports app that turns eco-driving into a game. Drivers win by beating their vehicle’s fuel economy ratings for city and highway driving. 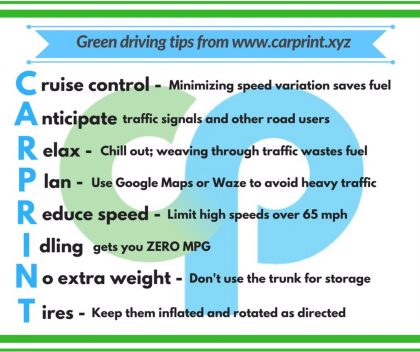 “The CarPrint Green Driving app is a win-win-win,” says Anna McDevitt, Director of Communications at CarPrint. “CarPrint takes the boredom out of driving, reduces your carbon footprint, and saves you money. What’s not to like about that?!”

“Driving efficiently can not only save people money, but can reduce ozone pollution, which is a trigger for many lung health issues like asthma and lung cancer,” says Janna West-Heiss with the American Lung Association.

Plan – Use Google Maps or Waze to avoid heavy traffic

Idling gets you ZERO MPG

No extra weight – Don’t use the trunk for storage

Tires – Keep them inflated and rotated as directed

To track users’ eco-driving progress, the app uses an on-board data (OBD) scanner paired with the driver’s Android or iOS mobile phone or tablet. The scanner plugs into the OBD port near the steering wheel and transmits driving data via Bluetooth to the driver’s mobile device. From there, data is uploaded to CarPrint, where numbers are crunched and shown to players. 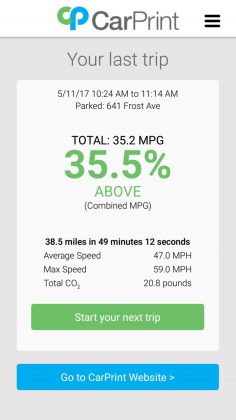