This summer, the world is taking two essential steps toward abating the damage caused by dental mercury fillings. Actions by both the US Environmental Protection Agency (EPA) and the United Nations Environment Programme (UNEP) to restrict the use of dental mercury are being commended by the International Academy of Oral Medicine and Toxicology (IAOMT), a network of dentists, scientists, and other professionals. They have been researching the deleterious effects of dental mercury since 1984 and began calling for a complete ban on mercury fillings in 1985.

Now, the IAOMT is calling for the next steps needed to fully protect the globe from the adverse effects of dental mercury on human health and the environment. All silver-colored dental fillings, often called “amalgams,” contain approximately 50% mercury. Dental mercury is known to pollute waterways and wildlife, and it is the predominant source of mercury exposure to people who have these fillings in their bodies. This creates an array of potential health risks for these patients. 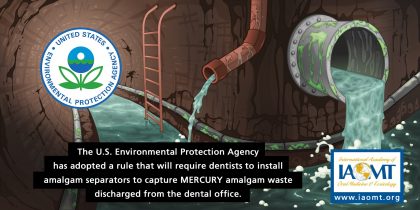 Amalgam separators reduce mercury released from dental offices into the environment. For this reason, the EPA utilized measures in the Clean Water Act to develop standards requiring that dental offices install amalgam separators. This requirement will go into effect on Friday, July 14, and the EPA has estimated that it could reduce the discharge of mercury by 5.1 tons annually.

However, the IAOMT notes that the EPA should also require routine maintenance for amalgam separators so that they do not fail and so that additional releases of mercury do not occur. It should also be remembered that amalgam separators only reduce dental mercury in wastewater and do not address the impact of mercury/silver fillings on human health.

A number of countries have already banned or strictly limited the use of dental mercury. Shockingly, the use of mercury in dentistry continues in the US without any restrictions by the Food and Drug Administration (FDA). This means that pregnant women, children, and all other American populations are still having mercury fillings placed in their mouths. Subpopulations in the US known to have higher rates of mercury filling placement include Black/African Americans, American Indians/Alaska Natives/Asians/Pacific Islanders, and members of the United States Armed Forces

“The world is getting healthier this summer with these latest actions against dental mercury,” IAOMT President Tammy DeGregorio, DMD, ND stated. “But to truly protect people and the environment, the use of dental mercury must completely end for all patients, all dental offices, and all global regions.”