The performance and energy of Renault e.dams was duly rewarded, as the French squad was crowned FIA Formula E champions for a third consecutive season. They are currently the only team in the category who has won the teams’ title.

During the first two seasons, Renault e.dams embraced the challenge of the Formula E championship from the outset.

That’s by winning the teams’ title on two consecutive occasions. Sébastien Buemi missed the drivers’ crown by only one point in the first season, but fought back even stronger in the second year and was crowned champion after a thrilling season finale in London. 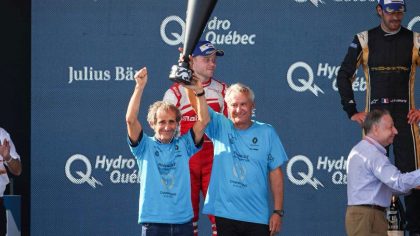 This year, Renault e.dams managed yet again, to win the title thanks to a stunning level of consistency with six victories out of twelve races.

They are the only team to have scored points in each race. With the squad very keen to reclaim their crown, the team and Sébastien Buemi were victorious at the opening round in Hong Kong. More wins followed in Marrakech and Buenos Aires. The team soon returned to winning ways in Monaco, where the Swiss driver started from pole position – his first of the season, and he remained unchallenged on the Monegasque track. One week later in Paris, Sébastien offered his first victory on home soil to Renault e.dams. He then added another victory to his tally in the second race in Berlin – his sixth in eight races. Meanwhile, Nico Prost allowed the team to get closer to the teams’ title by scoring valuable points in each round and was the only driver to have accomplished this impressive feat.

The race for the title was very tight at the Montreal season finale. That’s as only 18 points separated Sébastien from his closest rival, Lucas di Grassi. All as they approached the decisive weekend in Canada. Unfortunately, the team had a disappointing day on Saturday. That’s with Sébastien’s accident in free practice. So also and his disqualification. All the while bad luck returned on Sunday with a tough race for both drivers.