Animal Defenders International (ADI) applauds the Los Angeles City Council’s unanimous approval of Councilmember David Ryu’s motion. A motion to instruct the City Attorney to craft an ordinance to prohibit the exhibition of wild or exotic animals for entertainment or amusement.

The ordinance aims to protect wild animals from being used in circuses.

Especially other wild or exotic animal shows, and rentals for house parties.

ADI is honored to work with Councilmember Ryu and the City Attorney’s Office on this ground-breaking animal protection measure, which, when finalized. For it will make Los Angeles the largest city to pass such an ordinance. 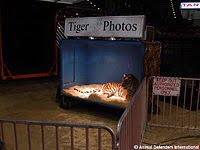 Despite assurances from the circus industry, the physical and psychological health of animals in circuses is inevitably compromised. Animals in circuses are routinely subjected to brutal training methods. Also and violence. Even wherever ADI has conducted an undercover investigation around the world, it has documented acts of abuse. Animal circuses do nothing to teach people about the animals’ real needs and the way they live, and have no role in education or conservation.

Guatemala recently became the 35th nation around the world which has banned either wild animals or all animals from traveling shows. ADI worked closely with Congressional Representatives Ryan Costello (R-PA-06) and Raúl Grijalva (D-AZ) on their introduction last month of H.R. 1759, the Traveling Exotic Animal and Public Safety Protection Act (TEAPSPA), which when passed will see an end to the use of wild and exotic animals in traveling shows in the US.

Last year, ADI rescued over 100 animals from circuses and the illegal wildlife trade in Peru and Colombia, including lions, bears, tigers, monkeys and others. ADI and the governments of Peru and Colombia collaborated for the unprecedented Operation Spirit of Freedom campaign; animals were rehabilitated at the ADI rescue center and rehomed in their natural habitats, with 33 African lions returned to their native Africa to start a new life at Emoya Big Cat Sanctuary, where ADI is funding construction of their habitats and their care. 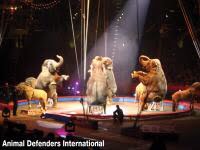 Background of worldwide movement to end the use of wild animals in traveling shows the evidence that the suffering caused to wild animals by the constant travel, severe restrictions on movement and unnatural lifestyle. For it has prompted authorities and governments around the world to end their use.

In the United States, 71 jurisdictions in 27 states have taken action to restrict wild animals from traveling circuses.

Hundreds of local ordinances are in place around the world, including in the UK, Europe, and South America.

Whether it is a traveling circus, or travel from county show to county show, the confinement for the animals is the same: 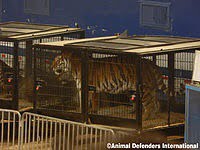 1. Traveling circuses cannot meet the physical, psychological or behavioral needs of wild animals. All due to severe confinement, physical and social deprivation. Especially long periods of time in transporters. Moreover and with brutal control methods and physical violence.

2. It is a myth that wild animals are trained with kindness and reward; the tools of the trade include stun guns and other electric prods, metal bars, whips, bullhooks (a heavy bar with a sharpened point and hook), deprivation of food and water and intimidation.

3. Keeping stressed, large, and dangerous wild animals close to the public in lightweight, temporary enclosures has proven disastrous. Workers and members of the public have been killed and maimed; lions, tigers and elephants have all escaped.

4. It is estimated that around 12% of Asian and 2% of African elephants in North America have tuberculosis (TB), a disease

transmissible from elephants to humans.

5. Because of the traveling nature of the circus, animal welfare officers have difficulty protecting the animals, making inspections, despite significant associated time and costs. This justifies a restriction, for the protection of the animals and the public.

6. Circuses must change with the times. Human only circuses are thriving. Cirque du Soleil now has 19 shows in 271 cities, generating an estimated $810 million a year. Whereas the wild animal traveling show, Piccadilly Circus, recently canceled performances across Southern California due to poor ticket sales.

Circus workers perform multiple roles; staff can be retrained, so jobs are not lost.

Circus Vargas removed their animal acts and the business continues. Surveys have shown that a decline in animal circuses can be matched by a rise in circuses with human performers.

Animal Defenders International (ADI) is active worldwide. Most importantly to end the suffering of captive animals in commercial use.

Also circuses and sport or leisure. I mean such as hunting or for products such as fur.

In addition, the replacement of animals in scientific research. Furthermore, funding and promotion of non-animal advanced methods. So ADI investigates, produces evidence and reports on the scientific, legal and economic issues for each case study. Thereby recommending solutions.