YOGYAKARTA, Indonesia—November 30, 2017—A zoo on Indonesian island of Java has ended animal performances in response to a campaign by Animals Asia, Scorpion Foundation and Change for Animals Foundation to expose the shocking exploitation of an orangutan, sun bear and otter for public entertainment.

Footage taken in February and April this year.  This was by Animals Asia’s Indonesian partner Scorpion Foundation.  For it showed a sun bear being forced to pedal a tricycle around a stage.  As well as an otter pushing a cart at Gembira Loka Zoo.  All located most importantly in Yogyakarta city. 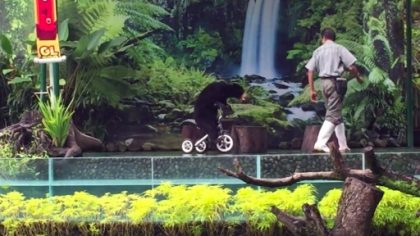 Another video shows a sun bear defecating and eating his own feces.  I mean that’s as much a sign of boredom as of hunger.  All according to Gabriella Fredriksson.  For she is a sun bear expert who runs the Sun Bear Center, in Borneo.

I an email she writes:

“There seems to be a lot amiss when [with] the sun bears’ behavior”. 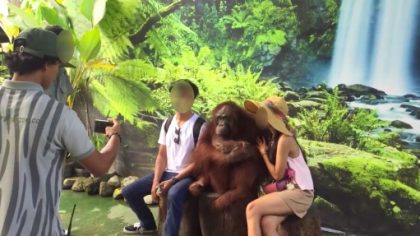 So I have heard that clearly captive animals are mistreated at Gembira Loka Zoo in Indonesia. The country is now starting to see animal performances end.  Especially as it confronts animal cruelty.  Most noteworthy and due to emerging animal protection sentiments among the public.

Another clip revealed an orangutan made to grin and pose for photos with visitors. It also showed nervous staff on hand to deal with the slightest hint of restlessness from the orangutan, in a powerful reminder that what wild animals are put through to entertain humans is entirely unnatural to them and an assault on their dignity.

After two follow-up visits in October and November, Scorpion’s monitoring team can confirm that the zoo has stopped offering photo opportunities with the orangutan. In addition, the sun bear and otter are no longer being exploited for profit.  So that’s a triumph for the tens of thousands of animal lovers.  All who signed a petition to end all cruel animal attractions in Indonesian zoos.

“This success is testimony to the incredible force for good that we can all be part of when cruelty is exposed. Petitions are read, public anger is felt, change does happen.

“The authorities and zoo managers are beginning to understand.  All that manipulating animals so they no longer behave in a natural, instinctive way.  It is not just inexcusable  For it’s also bad for business. Once these exposés come to light it’s over. For the public has shown it does not want to be party to this degrading and irresponsible spectacle which serves no purpose but to line pockets.”

At Surabaya Zoo, a dead giraffe was found with 40 pounds of plastic in his stomach.  Also, a lion got tangled in a cable and strangled himself to death.  In addition a white tiger died after a tongue injury left him unable to eat. Most noteworthy, elephants wear heavy chains around their feet.  Thereby preventing them from walking to their watering hole.  Finally or to the single patch of grass in their enclosure. (Read about Indonesia’s so-called “death zoo.”)

In February, Indonesia’s Environment and Forestry Minister spoke of the need for standardized laws on animal care.  Especially after a Scorpion exposé showing bears living in deplorable conditions in Bandung zoo went viral.

And in November, the Governor of West Java wrote to all the province’s mayors. Thereby asking them to issue directives.  All banning fights involving dogs and wild boars.  For he is saying the torture of animals was a crime.  Especially after Scorpion released footage of a vicious fight known as “dugong” or “adu bagong”.

Animals Asia is also campaigning for an end to selfies with sun bears Ajib and Marsha at the True Bali Experience Elephant Camp and an end to Indonesia’s cruel travelling dolphin circuses.

According to people familiar with the Indonesian zoos there, it’s a combination of low entry fees.  Also, a lack of reinvestment in improvements.  Finally and a government oversight agency that has no real knowledge or understanding of animal welfare.  Moreover or of the concept of indonesian zoos other than as a source of entertainment. (Most respected zoos worldwide make conservation and education their primary mission.)

In conclusion, Indonesia’s zoos are “predominantly appalling and way below acceptable minimum standards”.  This was said by Ian Singleton.  For Ian is a former zookeeper and wrote that in an email. Singleton spent nearly a decade at one of the UK’s top zoos.  In addition to the Jersey Zoo (now the Durrell Wildlife Park).  Also, in the British Channel Islands. He’s lived in Indonesia for nearly 25 years.  Most interestingly working as an orangutan conservationist.