To date one of the most fuel efficient hybrid electric cars on the market today. The ironic part to this story is they also will have a Plugin hybrid and electric version too. Ioniq is setting the stage for a fight on fuel economy versus traditional car markers.

Why I say that is besides Tesla Motors, all other car companies are gas powered to start; except Tesla Motors. However, this hybrid model only tested was the most fuel efficient hybrid and only priced at $22,000. What a deal and announcement to the marketplace that anything less than this hybrid is unacceptable. 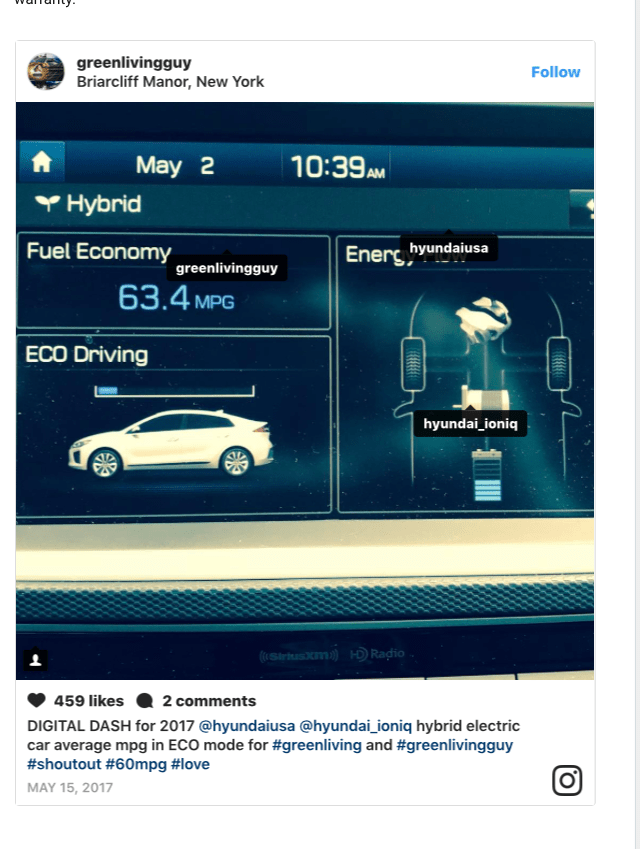 However, as my colleague John Voelcker from Green Car Reports said and I agree that it holds well in electric at high points but during acceleration is extremely limited. That can be changed for the better with proper programming on the controller (computer, the brains) but who am I to Judge. Let the people decide.
Again, at high speeds and during light driving, this Ioniq went directly to all electric or “EV” mode. This also showed the engine was off; even on I-684 where the speed limit is 65. So we got up to 72 at times and also coasted back down to 65. Yet the car liked being all electric.
As Hyundai adds:
Its design and engineering boosts the appeal of hybrids beyond fuel efficiency and sets this innovative hatchback apart from the others. Exceptional MPG is enhanced by a rewarding driving experience and a battery so advanced it comes with a lifetime warranty. 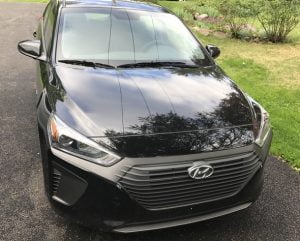 As you can see here, in ECO mode with acceleration or POWR mode too, we got 63.4 on average with this car. It’s impressive and only came close to a Toyota Camry hybrid but that only stretched to 60 MPG in ECO. The Ioniq loved 63-65 MPG. For example:

The interior is quite impressive for

a $22,000 car. Yet, Hyundai does have a production plant that I have seen which is quite impressive. Yes folks, for I mean at pumping out cars in Alabama. As Hyundai adds:

Ioniq Hybrid rewrites the rules for fuel-efficient driving. Its long list of popular available features and forward-looking design surrounds you in safety and comfort. Mobility moves forward, without compromise.

Also and I know you’re thinking the batteries will screw up the trunk size Seth! Well ha. Check this out!

As Edmunds review adds:
The Ioniq’s story isn’t just fuel efficiency, though. Even in base Blue trim, it’s a nicely loaded hatchback with plenty of cargo room, more than the regular Prius in fact (but less than the Prius Two Eco and its more compact lithium-ion battery pack; the regular Prius uses a nickel-metal hydride pack). And if you crave a fancier driving experience, you can get the Ioniq with features such as heated front seats, a sunroof, leather upholstery, blind-spot monitoring and a navigation system.

This on the other hand is extremely smooth on the uptick. For that helps with MPG. Also performance and overall driving feel on the road: smooth.

There’s nothing wrong comparing a hybrid to other hybrids on performance and efficiency. Most on performance screw up on MPG. This Ioniq hybrid doesn’t.

To be forthright, I’m not able to afford a Tesla just yet; however I am shopping for a car. Now while I’ve not been paid whatsoever by Huff or Hyundai to say anything here, the 2017 Hyundai Ionia is on the top of the list. Just saying!!