LONG BEACH, Calif. (Aug. 27, 2018) – Long Beach State University researchers and federal wildlife officials have begun to see encouraging results. There growths of rich green cordgrass! So after undertaking a pilot program to rebuild a threatened salt marsh with sediments dredged up from a local harbor.

The project site encompasses about eight acres of salt marsh within the boundaries of Seal Beach National Wildlife Refuge. The effort to rebuild the marsh has potential to restore habitat for the Light-footed Ridgeway’s rail, an endangered bird. It also promises to show whether similar projects can protect coastal marshlands from being lost to a double whammy of rising sea levels and sinking land. Protecting coastal lands is not only important for wildlife, but humans. That’s those who live and own property near the seaside.

“Wetlands provide a lot of protection and buffering for the communities that are behind the wetlands,” said Christine Whitcraft, associate professor of biological sciences and director of Long Beach State’s Environmental Science and Policy program.

Workers sprayed a 10-inch layer of dredged materials from the bottom of Huntington Harbour to the Seal Beach project site took place during the first half of 2016. The sediments have since settled to a lower elevation, and some Pacific cordgrass has since sprouted along the edges of the project site. Another plant species, called pickleweed, also grows throughout the project site.

Cordgrasses are important, Whitcraft explained, because plant cover shades the sand, preventing the surface from becoming hard and salty. A cooler and less saline environment benefits invertebrates, such as earthworms. Those creatures are important food sources for birds.

Besides the fact that many people enjoy living near the kind of green spaces that coastal wetlands provide, wetlands also play a role in filtering pollutants, absorbing storm flows and storing carbon, Nye said.

Furthermore, rising sea levels are a widespread concern in the Golden State. State government’s fourth Climate Change Assessment. Published Monday, called attention to several dangers emerging from a warning climate. On the subject of sea level rise, the assessment warns 31 to 67 percent of Southern California beaches may vanish. That’s by the year 2100. Unless people take significant steps to halt erosion.

In addition, Researchers monitoring the Seal Beach site compare how plants and animals are faring. That’s at the augmentation site and a nearby control area. That’s student researcher Chloe Van Grootheest said. They do so by analyzing photosynthesis activity among cordgrass at either site, measuring temperature and salinity, as well as taking sediment samples back to the Wetlands Ecology Lab to see what kind of creatures are living below the surface. “It’s slowly but surely coming back,” Van Grootheest said. “We have the low plant cover coming in and we have the larval insects that are here.”

About the campus:
Long Beach State University is a teaching-intensive, research-driven university committed to providing highly valued undergraduate and graduate degrees critical for success in the globally minded 21st century. Annually ranked among the best universities in the West and among the best values in the entire nation, the university’s eight colleges serve more than 37,500 students. The campus values and is recognized for rich educational opportunities provided by excellent faculty and staff, exceptional degree programs, diversity of its student body, fiduciary and administrative responsibility and the positive contributions faculty, staff, students and more than 300,000 alumni make on society. 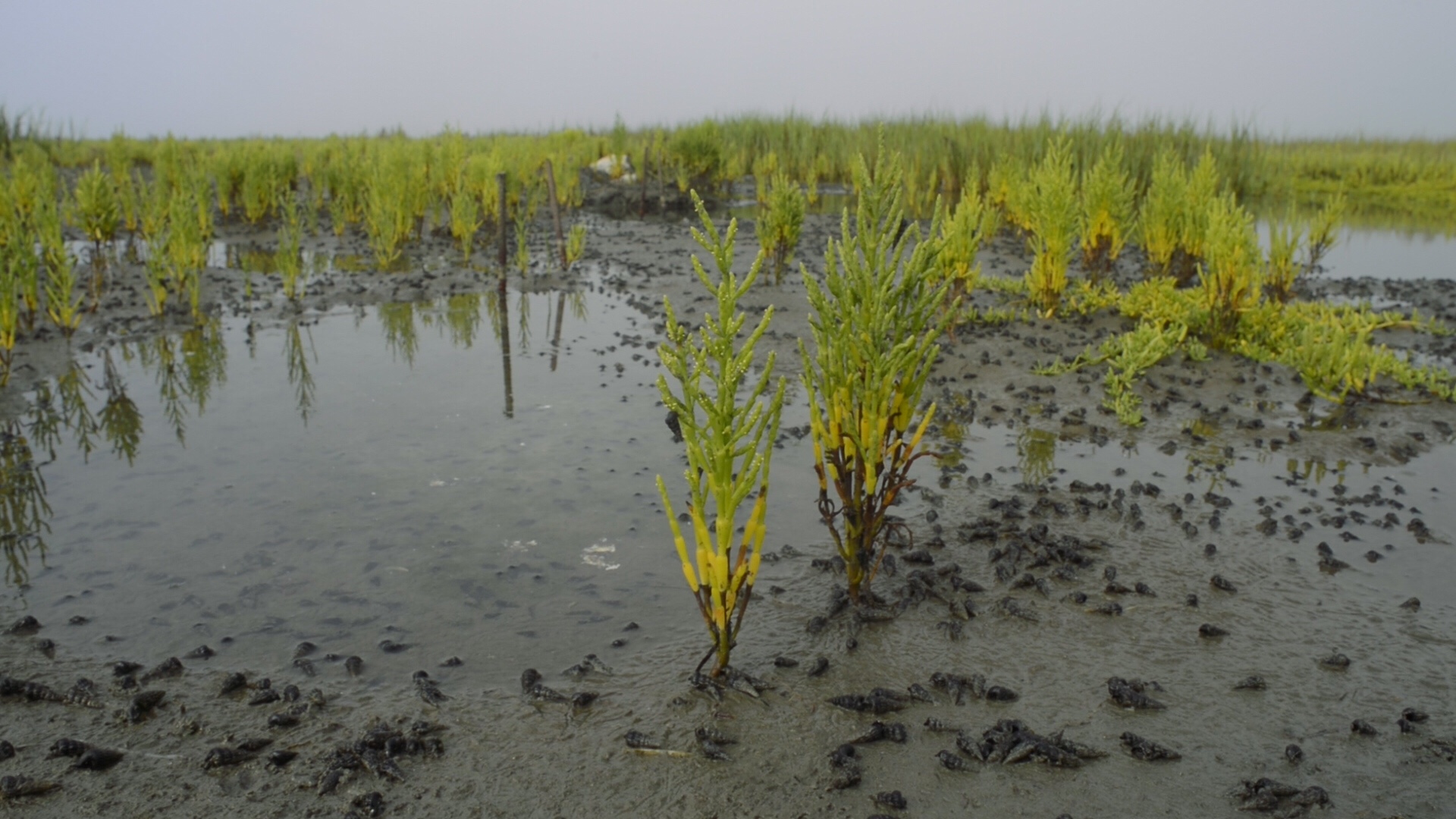 Pickleweed growing at Seal Beach National Wildlife Refuge, where Long Beach State University researchers are monitoring whether a layer of sediments dredged from the bottom of a nearby harbor will protect plants and animals from rising sea levels.