It applied its engineering ability to the 2019 UX 250h. I mean with a new-generation Lexus Hybrid Drive powertrain. With 181 total system horsepower. Because the UX 250h is the fuel-efficient leader.

All with the best MPG of any CUV and SUV without a plug in the U.S. market. This hybrid provides exhilarating driving with high-speed responsiveness and a feeling of smooth, natural acceleration. The UX 250h is equipped with all-wheel drive standard. 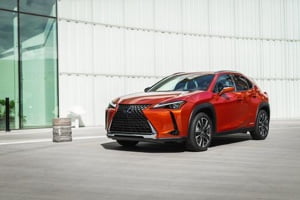 The hybrid system combines the same 2.0-liter four-cylinder gasoline engine found in the UX 200. It’s a hybrid with two electric motor/generators in a new-generation hybrid transaxle.

A transaxle that is more compact, lighter and has less internal friction than previous Lexus hybrid systems. Compared to similarly sized Lexus hybrids, the power control unit of the UX is more powerful yet 20% smaller and 10% lighter.

Optimizing the level of electric motor assistance and engine RPM produces a linear acceleration feel without the engine having to run at high revs. Engine speed synchronized with vehicle speed to create an immediate and continuous acceleration feel. 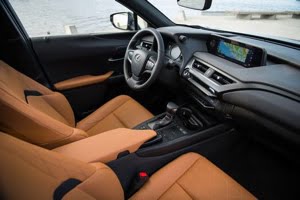 The new transaxle mounts the electric motor-generators (MG1 and MG2) coaxially rather than in-line. The resulting smaller and lighter package reduces frictional losses by 25% compared to the previous Lexus hybrids. In addition, MG2 is now a higher-speed motor, yielding better performance and efficiency.

The Sequential Shift feature delivers responsive engine braking force in 10 steps with a shift feel like a manual transmission, using steering wheel paddle shift switches or the S position on the shift lever.

So the speed at which the hybrid system can shut off the gasoline engine, such as when driving on long down slopes, raised. Lexus hybrids usually can only be electric at almost got to 43 mph. 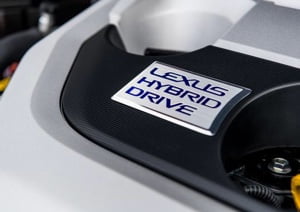 Locating the new compact and lightweight nickel metal-hydride (NiMH) battery and compact cooling system. All below the rear seat helps maximize cabin and cargo area space. Now NiMH being heavier and not as energy dense as lithium. However, their place supports the vehicle’s low center of gravity. I wouldn’t had done that, I would have included more lithium batteries for MPG with lead acid batteries for weight. Just me.

So the UX 250h model offers all-wheel drive (AWD) using a separate, dedicated electric motor-generator with 7hp output integrated into the rear differential. Power distribution between the front and rear axles is automatically optimized by the Vehicle Stability Control (VSC) system when accelerating, cornering, or driving on slippery surfaces. AWD provides stable driving on uphill slopes or snow-covered roads with lower fuel consumption than a conventional all-wheel drive system that employs a power split device and driveshaft. AWD does more than help traction in slippery conditions; the system can actively improve stability by adjusting rear-wheel power to help correct an over or understeer condition.

YET AS CAR AND DRIVER ADDED:Lexus tried and failed once at this entry-luxury game. It turned out there wasn’t much demand for the mildly luxury type Prius that was the CT200h hybrid hatchback or—worse—the ungainly HS250h. But everybody wants crossovers today, so that’s what Lexus’s new starter model is. For its latest dalliance with low-cost luxury, Lexus wisely hews closer to modern buyers’ preferences, proffering the new UX crossover. The UX is essentially a Toyota underneath, using the same underpinnings as the C-HR and the same base powertrain as the Corolla hatchback, but it incorporates the key tenets—plastic cladding, all-wheel-drive availability, and the L badge—that those Toyota’s lack. 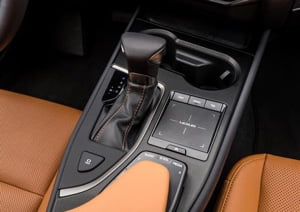 Yet Automobile Magazine hit the nail on the head for this hybrid:

The UX, which replaces the CT as least-expensive vehicle in the Lexus lineup, aimed at young buyers, meaning young by human demographics (under 35) as opposed to Lexus demographics (under 85. We kid, sort of). While it has similar underpinnings and dimensions to another youth-oriented compact crossover in the Toyota universe, the CH-R, the UX gets more welding and adhesives to further solidify its structure. Also like the CH-R, the UX 200 will be front-drive only.

The UX 250h hybrid, however, is all-wheel-drive-ish. It has an electrically powered rear axle similar to that of the Toyota RAV4 Hybrid, but it only works up to 45 mph. That’ll be a bit of a mind-bender for some of us—myself included—so we’ll let those thoughts percolate for a few minutes and talk about styling.Hybrid. The UX, which replaces the CT as least-expensive vehicle in the Lexus lineup, aimed at young buyers, meaning young by human demographics (under 35) as opposed to Lexus demographics (under 85. We kid, sort of).

While it has similar underpinnings and dimensions to another youth-oriented compact crossover in the Toyota universe, the CH-R, the UX gets added welding and adhesives to further solidify its structure. Also like the CH-R,the UX 200 will be front-drive only. The UX 250h hybrid, however, is all-wheel-drive-ish. It has an electrically powered rear axle similar to that of the Toyota RAV4 Hybrid, but it only works up to 45 mph.

That’ll be a bit of a mind-bender for some of us—myself included—so we’ll let those thoughts percolate for a few minutes and talk about styling.

The UX 250h Hybrid equipped with Lexus Drive Mode Select, which allows the driver to tailor the driving experience by selecting from three different drive modes. 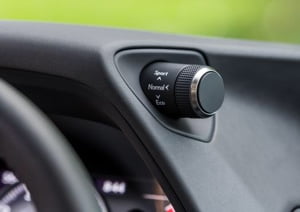 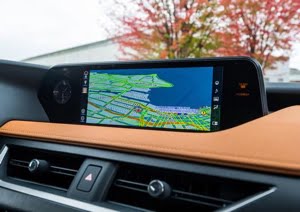 The UX 250h debuts Predictive Eco Drive Control. For its world-first system. One that is coupling with the navigation system. Therefore, learning driving habits, predicts the expected roadway ahead. It also analyzes real-time traffic reports. This’ll optimize charging and discharging of the hybrid battery. The more miles the UX 250h driven, the more data gathered. All to help optimize fuel consumption. So had I tested the car for longer, more than likely the MPG would have gone up. (The system can be turned off if desired.)

Also working with navigation, Predictive Deceleration Support technology uses accumulated knowledge. I mean about a driver’s behavior. For that’s to predict when and where the vehicle is likely to slow down or stop. For example, when the UX approaches a place where the driver has slowed or stopped in the past. Then and only then the driver releases the accelerator pedal.

Predictive Deceleration Support increases regenerative braking, allowing more efficient energy to be recovered and recharged into the hybrid battery. The system can offer deceleration support up to about 1,000 feet ahead of the vehicle.

Predictive Charge (SOC) control for the hybrid battery is a world-first technology that functions on both downhill roads and in congested traffic. Operating when the UX is following guidance from the navigation system, it will predict the route for distance up to 6 miles ahead to optimize the conditions under which it can regenerate energy, earning power for future driving.

It seemed to me like the BMW advanced aerodynamics when driving downhill or anywhere you can recapture your MPG.

As well, it also had the Ford type program to capture the most energy from a deceleration or going downhill. The Cadillac ELR had this and the Chevy Bolt has it but you need to paddle to do this. No paddle in the Lexus. It just does it. 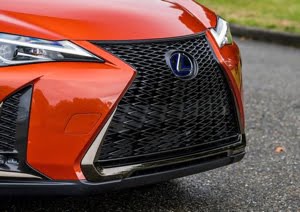 Conversely, in stop-and-go traffic or low-speed driving, the electric motor used more. Thereby reducing the hybrid battery’s charge. In this scenario, Congestion SOC control uses traffic information from the navigation system to find if any congestion expected on the planned route. If so, it actively charges the hybrid battery before reaching the congested area. Then reducing the need of forced engine start to charge the battery in those conditions.

The UX, the new gateway to the brand. For it features the advanced safety technology expected from a Lexus. UX models equipped with ten airbags. For that’s a: 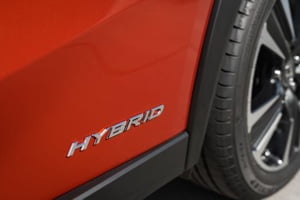