The continuous evolution of the Jeep® brand. As they announce and preview the new Jeep plug-in hybrid Renegade.

So with the new plug-in hybrid electric PHEV all bets are off. The technology steps up the values of the Jeep brand: on one hand, applied to the Trailhawk version. Therefore it further its off-road performance. As well as on the other hand it enhances the Jeep range during everyday use.

Back in February 26, 2019 FCA announced plans to invest a total of $4.5 billion in five of its existing Michigan plants. That’s also to work with the city of Detroit and state of Michigan. That was on building a new assembly plant within city limits. The proposed projects would create nearly 6,500 new jobs. 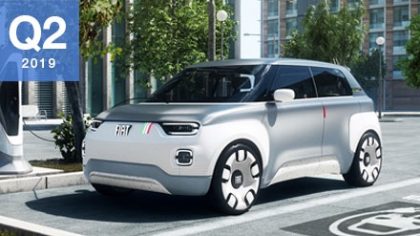 Today, the Jeep brand is taking another step forward, along a relentless pathway of electrification. All which integrates with the unrivaled technical layout of every Jeep SUV. As well as makes Jeep Renegade a vehicle of absolute freedom.

FCA announced plans to invest $1.6 billion to convert the two plants. Plants that comprise the Mack Avenue Engine Complex into the future assembly site for the next generation Jeep® Grand Cherokee. As well as plug-in hybrid (PHEV) model.

It was part of a $4.5 billion investment announcement that will also impact five existing Michigan facilities. In total, the proposed projects will create nearly 6,500 new jobs.

In fact, both Renegade and Compass are extremely respectful of the environment. That’s with CO2 emissions lower than 31.1 miles all electric. As well as fun to drive.

Especially courtesy of fast engine response and smooth acceleration. They are fitted with plug-in hybrid propulsion systems, and batteries. Batteries which can be recharged by the internal combustion engine. I mean or from an external power outlet.

Furthermore as a consequence, it can store an impressive amount of electric energy. This choice allows for the use of more powerful electric motors.

Those which translate into a pure electric range of approximately 31.1 miles.

Then about 81 miles per hour of all electric top speed for both Renegade and Compass. That’s before gas kicks in! 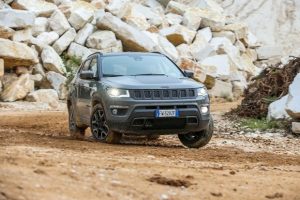 The electric units work in synergy with the new 1.3-litre turbo gas engines to increase efficiency and power overall. So therefore combined action of the two propulsion systems are gas and electric. Combined it produces up to 240 hp.

The off-road benefits of hybrid propulsion

Above all, thanks to electrification, the Jeep range is further improving its legendary capability. As we know, courtesy of the high torque. All with an electric motor and the ability to adjust it with extreme precision during take-off.

In the spotlight at the Jeep stand in Geneva, these new plug-in hybrid models are equipped with batteries that are rechargeable from an external power outlet and, as a consequence, can store more electric energy. This choice allows for the use of more powerful electric motors, which translate into a pure electric range of approximately 50 kilometers and about 130 km/h full electric top speed for both Renegade and Compass.

The electric units work in synergy with the new 1.3-litre turbo petrol engine to increase efficiency and power overall. For the Renegade, the power sits in the 190 and 240 hp range resulting in outstanding on-road performance: 0-100 km/h is reached in approximately seven seconds.

But above all, thanks to electrification, the Jeep range further improves its legendary off-road capability. That’s courtesy of the greater torque offered by the electric motor. Moreover the ability to adjust it with extreme precision. Especially uring take-off and while driving on the most challenging terrain. All where a very low transmission ratio is needed.

Thanks to the new electric all-wheel-drive technology (eAWD).

So the Renegade and Compass PHEVs featuring a dedicated instrument cluster and infotainment screen. It’s updated in order to help the customer with information related to daily hybrid driving.

All while being loyal to its mindset of overcoming any limit. Therefore the Jeep brand continues to evolve and to develop /bring its SUVs to the next level. Next level in line with its core values of freedom, authenticity and passion. Today as a consequence the brand is embracing a new challenge and setting new standards.

Behind the wheel of Jeep Renegade and Jeep Compass featuring PHEV technology.

More noteworthy and for the first time, it will be possible to tackle the most extreme off-road trails. Meaning not only in the utmost safety but also while listening to the sounds of nature.