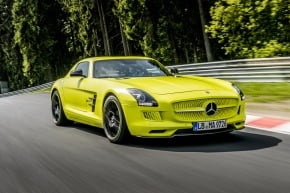 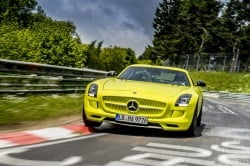 Now it’s coming back to life  what do I mean? Well today I got a tweet about this story from Top Speed!

“Even in the wake of this year’s Frankfurt Motor Show – which has lost some of its glam if we’re being completely honest – it’s hard to ignore one launch in particular, namely the Porsche Taycan.

In all fairness, the Taycan has indeed been teased and then teased some more over the past months, however, when Porsche finally dropped the mic and unveiled its first-ever electric sports car, the audience had plenty of things to absorb.

The same can be said about Porsche’s arch-rival Mercedes-Benz, whose plans to introduce an electric AMG-badged model that would compete with the Taycan have been highlighted in Frankfurt by Mercedes-Benz head honcho Ola Kallenius.”

Now it’s etc etc etc so you can read on but  in June 06, 2013 from Nürburg/Affalterbach came this announcement. So in conclusion I’m confused!

In addition and one which masters the legendary race track in under eight minutes. The record time of the SLS AMG Coupé Electric Drive was notarially certified. Two weeks after the first overall win for the Mercedes-Benz SLS AMG GT3 in the 24 Hours Nürburgring, a further member of the SLS AMG family impressively demonstrates its potential on the most difficult race track worldwide.

For the first time, consequently that an electrically-powered series production vehicle circles the Nürburgring Nordscheife in under eight minutes. The record for the SLS AMG Coupé Electric Drive in 7:56.234 minutes. Nordschleife shows the special position of Mercedes innovative and unique drive solution. I mean they are serious about this!

The SLS AMG Coupé Electric Drive, with which Mercedes Electric AMG set up. I mean a record on the 20.832 kilometers long traditional race track in the Eifel. This thing corresponds to the series version, which celebrates its launch in June 2013. The currently strongest AMG high-performance car has four electrical motors with a total output of 552 kW (751 hp) and maximum torque of 1000 Nm (738 lb-ft).

The gull wing car is therefore advancing to become the strongest and fastest electrically-powered series production vehicle in the world. The SLS AMG Coupé Electric Drive accelerates from zero to 100 km/h in a mere 3.9 seconds and can reach a top speed of 250 km/h (electronically limited).

In other words we are talking a new dimension of driving performance. That’s consequently because the AMG brand pledge is fulfilled to remarkable effect. That’s by the outstanding performance dynamics which also come courtesy of AMG Torque Dynamics. So as a result and more interestingly, there are four electric motors. In addition and are made possible by the wheel. That I mean is it’s “selective all-wheel drive”. The most “electrifying” gullwing model ever has been developed in-house by Mercedes-AMG GmbH.

So the extremely powerful high-voltage battery for the SLS AMG Coupé Electric Drive is as a result of the collaboration. This is consequently a collaboration between Mercedes-AMG and Mercedes AMG High Performance Powertrains. They are also in Brixworth in the UK.  Most importantly, this is setting the pace in energy density, power density and efficiency. So look out Tesla right?!

So consequently here comes the British Formula 1 experts. Similarly and as a result, they drew on their extensive experience with KERS hybrid concepts.

In conclusion, the car’s agile response to movements of the accelerator pedal as well as the linear power output. Finally, they are a source of pure delight. I mean and consequently unlike with a combustion engine. I mean as a result, the build-up of torque is instantaneous with electric motors.

Again and 100% Torque at Zero RPM means just that. It’s 100% or maximum torque is effectively available from standstill.

Consequently the spontaneous torque build-up and immense power delivery. All as a result it comes without any interruption in traction. Now and again that’s combined with completely vibration-free motor running characteristics.

Finally and in conclusion, here’s an overview of the most importantly deemed data from the Mercedes Electric AMG! 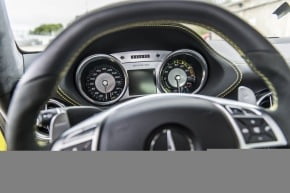