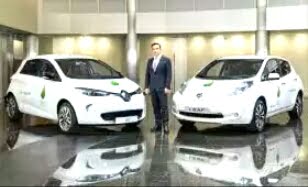 Well folks. We need more charging points and we need faster charging times. As we know global warming is a reality. It’s caused by an excess of CO2 in the atmosphere. Thereby acting as a blanket and trapping the heat. Then it’s keeping on warming up the planet. So Nissan As a global automotive manufacturing group, can’t ignore their industry’s role in this phenomenon. Passenger cars alone contribute 15% of all greenhouse gases emitted globally.

Other manufacturers are engineering solutions to lower exhaust emissions from conventional engines. However, the Renault-Nissan Alliance has already become a world leader in sales of zero-emission vehicles. That’s by driving more than 250,000 battery-powered cars and vans sold to date.

Apart from being fun to drive, a battery-powered vehicle does not produce CO2 emissions or air pollutants.*

In addition, EVs help reduce global warming and improve the quality of air in cities.

Surveys in Rome and Hong Kong suggesting that by 2020, with EVs accounting for just 20% of city Centre traffic. So therefore the concentrations of nitrogen dioxide. It’s a recognized respiratory irritant. It can be reduced by as much as 45%. Imagine how much better that would be if, every other vehicle was an EV.

Life would be quieter, too, as an EV is virtually silent in use.

As an EV pioneer, the Alliance has been the target of cynics and critics. All convinced the technology would never work. History shows they are wrong. With fewer moving parts than a conventional car, Renault and Nissan EVs have proven to be extremely reliable and customer satisfaction is over 90%.

Consequently, the cars are also a big hit with car enthusiasts. In 2011,  the Nissan LEAF was named Japanese, European and World Car of the Year. And now the Renault ZOE has picked up the same winning habit with a string of awards across Europe, like the distinguished “Red Dot” award for superior design.

Therefore, Alliance vans are also proving popular with companies. That’s especially those operating in cities. They are attracted by their ease of use. As well as versatility, lower maintenance costs and, of course, the lack of tailpipe emissions.

One example is the Corri-Door Project launched by EDF the French electric utility company. So besides launching with the  first two quick charging points at the Bosgouet Nord (A13) and Tardenois Nord (A4) motorway service stations in France operated by SANEF.

There are an additional 200 fast charging points. That’s all across the country. The charging points can recharge a LEAF or a ZOE to 80% capacity in less than 30 minutes.

In conclusion and besides a quick charge network with charging points are getting closer to my favorite project. That’s vehicle-to-grid (V2G) technology. Consequently, where a parked electric vehicle can return its energy to the grid.

The future is here and it’s electric!

Finally, talk about regulated atmospheric pollutants while driving according to homologation cycle (NEDC).