Ford is investing an additional $250 million and adding 450 more direct jobs across the Rouge Electric Vehicle Center.  Also the Van Dyke Electric Powertrain Center and Rawsonville Components Plant. For the investment and added jobs will help increase production capacity to 80,000 trucks a year.

In addition, the F-150 Lightning is with a starting MSRP of $40,000.  Moreover and targeted EPA-estimated driving range of 300 miles.  I mean that’s with the extended range battery1. It is also aimed at the heart of the U.S. auto market. For Ford has taken more than 150,000 reservations for the trucks to date.

Then assembling it at this high-tech facility in Michigan.  For these represents a significant step toward mass adoption of electric vehicles in America.  These comments came from Kumar Galhotra. He is Ford’s president of The Americas and International Markets Group.

Ford confirmed construction of the Rouge Electric Vehicle Center a year ago as part of an initial $700 million investment in the historic Ford Rouge Center, creating a manufacturing home for the F-150 Lightning. Now Ford’s pre-production F-150 Lightning trucks are leaving the factory for real-world testing, with the truck available to customers next spring.

Ford’s $250 million additional investment will create 450 additional hourly direct jobs, with most of those workers assembling the F-150 Lightning at the Rouge Electric Vehicle Center.

Workers at Rawsonville Components Plant will assemble the batteries and Van Dyke Electric Powertrain Center will increase its capacity to supply electric motors and electric transaxles for the F-150 Lightning.

This is the latest in Ford’s continuing investment in Michigan. Ford has invested $7.7 billion in the state and created and retained 7,000 Michigan jobs since 2016, including bringing the new Bronco SUV and Ranger pickup production to Michigan, refurbishing Michigan Central Station, developing a new Ford Research and Engineering Campus in Dearborn, creating Ford’s Ion Park in Romulus and more. Michigan has been the home of Ford since its founding in 1903 and these sites represent a growing network across southeast Michigan that will support the next generation of Ford’s battery electric, connected and autonomous vehicles. 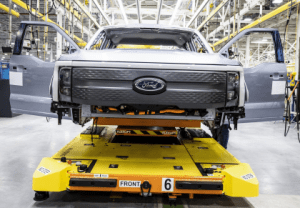 In conclusion, the Rouge Electric Vehicle Center is in the Ford Rouge Center.  All which sets the benchmark for sustainable automotive assembly. This new center supports Ford’s vision of sustainable production as a zero waste-to-landfill site.

Furthermore, the center uses natural lighting.  I mean as well as LED lighting and the primary forklift fleet.  They will use hydrogen fuel cells with a zero-emission profile. The Rouge Electric Vehicle Center is built on the site of the old Dearborn Assembly Plant, using its recycled foundation and construction materials.