The invention of the incandescent light bulb changed how people live and access electricity. However, it wasn’t until the oil crisis in the 1970s that cracks in incandescent lighting began to show. Just as the buzzword became “energy efficiency,” compact fluorescent (CFL) light bulbs — technology five times more efficient than incandescents — hit the market.

There’s great potential and enthusiasm for a widespread transition to LEDs as governments phase out incandescent lighting. What was once an expensive, niche lighting technology of the 1970s is now our best low-energy option. 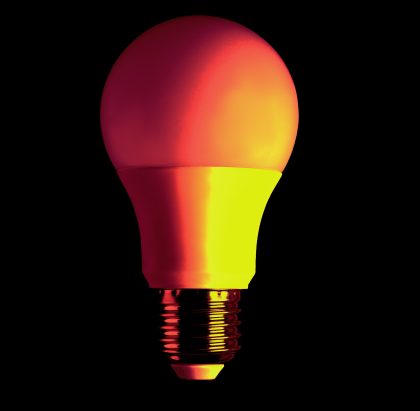 Of all the advantages of LEDs, their energy efficiency is unmatched. LEDs are 90% more efficient than incandescent light bulbs and save the average household approximately $225 in energy costs annually. In comparison, incandescents can only convert 10% of energy into light — losing the remaining 90% as heat.

Considering lighting accounts for 10% of household energy consumption — with 25% of residential homes utilizing over 40 light bulbs — replacing incandescents with LEDs is the fastest way to save money on utilities.

LEDs also have a much longer life span than traditional light bulbs. For example, 30,000 to 50,000 hours is typical for high-quality LED products. Meanwhile, incandescent light bulbs last only 1,000 hours and CFL products can operate between 8,000 and 10,000 hours.

A transition to all LED lighting also has environmental benefits. Unlike CFLs —  which have trace amounts of mercury per bulb — LED lights don’t contain this harmful element. While you won’t risk mercury exposure if you handle a CFL light bulb, breaking one can pose a significant risk to your health and the environment. There are even specific disposal procedures in place for getting rid of CFLs and preventing mercury from entering the atmosphere.

Studies have shown a link between individual awareness and guilt surrounding climate change and the adoption of energy-efficient lighting. In fact, LEDs and CFLs are likely to account for 90% of the world’s indoor lighting in 2022.

According to a recent study by Signify, the commercial implementation of LEDs can reduce 3.9 million tons of carbon emissions in the United Kingdom and Ireland — or the same amount of emissions 175 trees sequester annually.

Of course, the increasing consumer demand for energy-efficient lighting systems makes the transition to LEDs possible — higher market demand can equate to lower consumer prices. Fortunately, LED production has ramped up amid declining materials costs and government subsidies for purchasing semiconductor equipment. As a result, the global LED market should reach $25.78 billion by 2024.

Global government intervention in LED lighting products is yet another enabling factor that fast-tracks LEDs to become the norm. For instance, in April 2022, the U.S. Department of Energy (DOE) adopted two new regulations regarding light bulbs. After redefining general service lamps, they set a new minimum standard of 45 lumens per watt for light bulbs.

With these new standards in place, the DOE projects the total U.S. consumer savings on utility bills will amount to $3 billion annually. Further, transitioning to all LED lighting should cut 222 million tons of residential carbon emissions within 30 years.

The Future of Energy-Efficient Lighting Is Now

LEDs have proven to be a viable, energy-efficient alternative to traditional lighting by allowing consumers, businesses and governments to use less energy and save on rising electricity prices. As manufacturing and market costs continue to decline, transitioning to all LED lighting is no longer something to strive for in the future — it can happen now.